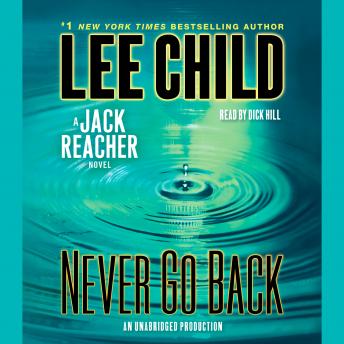 Never Go Back is a novel of action-charged suspense starring “one of the best thriller characters at work today” (Newsweek).

Former military cop Jack Reacher makes it all the way from snowbound South Dakota to his destination in northeastern Virginia, near Washington, D.C.: the headquarters of his old unit, the 110th MP. The old stone building is the closest thing to a home he ever had.

Reacher is there to meet—in person—the new commanding officer, Major Susan Turner, so far just a warm, intriguing voice on the phone.

But it isn’t Turner behind the CO’s desk. And Reacher is hit with two pieces of shocking news, one with serious criminal consequences, and one too personal to even think about.

When threatened, you can run or fight.

Reacher fights, aiming to find Turner and clear his name, barely a step ahead of the army, and the FBI, and the D.C. Metro police, and four unidentified thugs.

Combining an intricate puzzle of a plot and an exciting chase for truth and justice, Lee Child puts Reacher through his paces—and makes him question who he is, what he’s done, and the very future of his untethered life on the open road.

It was like two books in one, I wasn't going to read it because I saw the movie. But as the movie had little to do with the book, it was like a two in one. Gotta say I like the daughter plot line better in the movie.

Can I give it 10 stars? Reacher is at his personal best again in this installment. The plot and characters were well laid out and left me glued to my car seat for several extra tours around the block. Susan and Reacher make a great team and manage to best some pretty powerful and smart adversaries. I admit to being a total Reacher groupie and may be biased, but I love the stories when he brings down the bad guys while dealing within Army regulations.

Excellent novel. Well read. I liked the character development and the plot. The reader had a nice mature voice. He was well suited to the character of Jacl Reacher.

I love Jack Reacher. Lee Child always has you thinking about where the story will go next. Some of the scenarios are predictable to a point but you are never sure when or where the twist or twists are coming. And when I read these books I "hear" Dick Hill in my head.

good story, short. because I have read the other stories I could follow the characters from other story lines.

Great book and a great narrator with different voices for different characters. Listened to this novel on a long train ride and it really made the time fly. I will use it again soon.

This title is due for release on September 3, 2013
We'll send you an email as soon as it is available!