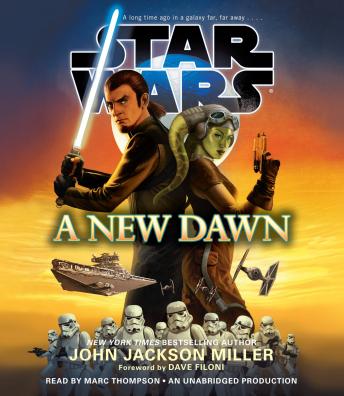 “The war is over. The Separatists have been defeated, and the Jedi rebellion has been foiled. We stand on the threshold of a new beginning.”—Emperor Palpatine

For a thousand generations, the Jedi Knights brought peace and order to the Galactic Republic, aided by their connection to the mystical energy field known as the Force. But they were betrayed—and the entire galaxy has paid the price. It is the Age of the Empire.

Now Emperor Palpatine, once Chancellor of the Republic and secretly a Sith follower of the dark side of the Force, has brought his own peace and order to the galaxy. Peace through brutal repression, and order through increasing control of his subjects’ lives.

But even as the Emperor tightens his iron grip, others have begun to question his means and motives. And still others, whose lives were destroyed by Palpatine’s machinations, lay scattered about the galaxy like unexploded bombs, waiting to go off. . . .

The first Star Wars novel created in collaboration with the Lucasfilm Story Group, Star Wars: A New Dawn is set during the legendary “Dark Times” between Episodes III and IV and tells the story of how two of the lead characters from the animated series Star Wars Rebels first came to cross paths. Featuring a foreword by Dave Filoni.

I really like the series Star Wars rebels I watch it all the time. This book made me understand the series a little better and how it ties in to the original Star Wars movies ????????ps The series on TV Star Wars rebels season four has ended a while ago is they’re going to be a season five I hope so ?

This book was wonderful, really fills the void for wanting more from the crew from StarWars Rebels!

narrator is a great, well established voice actor. He brings so much life to the characters. The writting is great, very true to the core material and gives a great look into the early life of the rebels

absolutely amazing work on this book! I cried and laughed along listening to this book the whole time! definitely in my top 5 favourite star wars books!

I loved Kanan and Hera in the Star Wars Rebels show, this was perfect! I hope this isn't the last story we get of them. Great narrator, so many distinct voices from just one person, it's really impressive, some were a bit too over the top though.

Good expansion on kanan and hera’s relationship, you feel like you really get to see them bond over first adventure together and can see how that leads to what it becomes on Star Wars rebels. Count vidian is a memorable villain who shows a different angle on the empire’s ruthless efficiency. The narrator was fine but I found some of his voices to not be so great, I would have preferred if he kept closer to his natural voice. I also found his narration somewhat overly enthusiastic/dramatic at times in terms of his reading style. Overall though it doesn’t take away too much from the story which is super fun.

This book is in more dire need of an editor than anything I’ve read in the Star Wars universe. The story is barely interesting enough to warrant getting through this in any format. I tried reading and listening. BORING!!!!! The audio was fine but the voices chosen are SUPER ANNOYING. Listening to a main screech and yell for hours makes it almost unlistenable. It’s the worst Star Wars I’ve read out of 20 . Do not waste your time or money.

Probably the most annoying voices 8 have ever heard.

It’s Star Wars so still a great book. Just felt like the story dragged a bit. The production value was top notch like every other Star Wars book

The story was ok, but told way to long in a dull way at times. Sometimes i just fased out during the listening. On the plus side, when you miss part, that ain't to big of a deal. Ok story, bad writing in my opinion. Unlike the rest of the new canon storie, wich are great!

Plodding storyline. Disappointing because I like the Star Wars label. 12 hours? Could have been told in 6. I zoned out for minutes occasionally, but still got the gist of it. Great voice actors though.