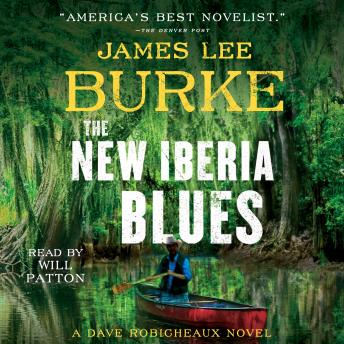 Named one of the best crime novels of 2019 by The New York Times Book Review.

The shocking death of a young woman leads Detective Dave Robicheaux into the dark corners of Hollywood, the mafia, and the backwoods of Louisiana in this New York Times bestselling mystery from “modern master” (Publishers Weekly) James Lee Burke.

Detective Dave Robicheaux’s world isn’t filled with too many happy stories, but Desmond Cormier’s rags-to-riches tale is certainly one of them. Robicheaux first met Cormier on the streets of New Orleans, when the young, undersized boy had foolish dreams of becoming a Hollywood director.

Twenty-five years later, when Robicheaux knocks on Cormier’s door, it isn’t to congratulate him on his Golden Globe and Academy Award nominations. Robicheaux has discovered the body of a young woman who’s been crucified, wearing only a small chain on her ankle. She disappeared near Cormier’s Cyrpemort Point estate, and Robicheaux, along with young deputy, Sean McClain, is looking for answers. Neither Cormier nor his enigmatic actor friend Antoine Butterworth are saying much, but Robicheaux knows better.

As always, Clete Purcel and Davie’s daughter, Alafair, have Robicheaux’s back. Clete witnesses the escape of Texas inmate, Hugo Tillinger, who may hold the key to Robicheaux’s case. As they wade further into the investigation, they end up in the crosshairs of the mob, the deranged Chester Wimple, and the dark ghosts Robicheaux has been running from for years. Ultimately, it’s up to Robicheaux to stop them all, but he’ll have to summon a light he’s never seen or felt to save himself, and those he loves.

Stephen King hailed New York Times bestselling author James Lee Burke “as good as he ever was.” With The New Iberia Blues, Burke proves that he “just keeps getting better” (Booklist, starred review), and is “one of a small handful of elite suspense writers whose work transcends the genre, making the leap into capital-L Literature” (BookPage).

Overdone. Instead of using words to better develop his characters Burke has packed the pages with prose that is somewhere between purple and cyanotic blue. What a waste. I got the audiobook for a road trip so scanning and skimming was almost as difficult as listening to the overworked passages. As a person with family and roots deep in New Iberia - and who has loved Burke’s writing for years- I am disappointed by the endless, self-involved reflection in this book. Burke is no Dostoevsky and he sure ain’t no Cormac McCarthy I wish he’d make up his mind what he wants to write - do it better - and more simply. Maybe He’s spent too much time in Montana where the sky is the limit. This reads like editors didn’t spend enough time with this book.

Pretty clunky and I did not like the accents. Can I had to fight my way through this one. Keep looking

Perfection! Burke’s words are like brush strokes on a canvas. No one but Patton could ever voice Robicheaux...period.

Burke does not disappoint. Vintage Dave Robicheaux that kept me on edge till the end. I normally do not let my recreational listening keep me from running errands, doing chores, etc...but this novel haunted me to keep going late into the night, and to pick it up upon rising. One of my best reads in months.

JLB is just a great story teller. Will Patton once again did a great job with the narration.