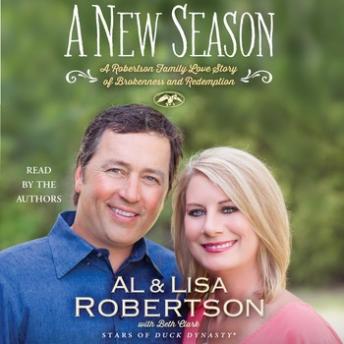 A New Season: A Robertson Family Love Story of Brokenness and Redemption

Alan and Lisa Robertson, members of America’s favorite back woods family and the Duck Commander Clan, take on the topic of relationships as they share the secrets that saved their marriage.

Infidelity, deceit, distrust, and shame. Unfortunately, these are recurring themes in many of today’s marriages in America—even in the family-values-promoting, Christian-based Robertson family.

With a romance that began in junior high, the couple got off to a rocky start but soon settled into married life and had two baby girls. Alan became a pastor in the church where his family had been members for years. Then, when Lisa had an affair, the heartache and the tension was very public.

But this is not a book about a marriage gone wrong. It is a candid story of rescued love and renewed commitment. After nearly getting divorced, Alan and Lisa came to terms with what went wrong in their marriage and both began the hard work of making it right. Now married for twenty-nine years, Alan and Lisa counsel couples in trouble and speak across the country—openly sharing their hardships, their journey to renewed commitment, and a thriving marriage.

This title is due for release on January 6, 2015
We'll send you an email as soon as it is available!