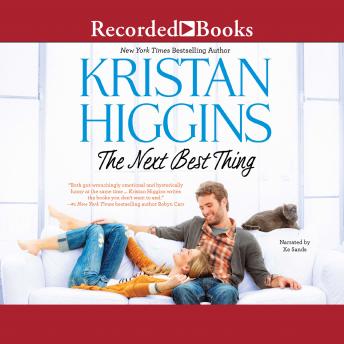 The Next Best Thing

Lucy Lang isn't looking for fireworks. She's looking for a nice, decent man. Someone who'll mow the lawn, flip chicken on the barbecue, teach their future children to play soccer. But most important: someone who won't inspire the slightest stirring in her heart.or anywhere else. A young widow, Lucy can't risk that kind of loss again. But sharing her life with a cat named Fat Mikey and the Black Widows at the family bakery isn't enough either. So it's goodbye to Ethan, her hot but entirely inappropriate 'friend with privileges,' and hello to a man she can marry. Too bad Ethan Mirabelli isn't going anywhere. As far as he's concerned, what she needs might be right under her nose. But can he convince her that the next best thing can really be forever?

This title is due for release on June 24, 2016
We'll send you an email as soon as it is available!