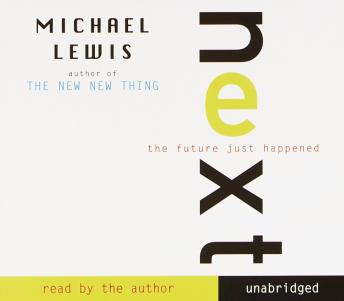 Next: The Future Just Happened

In Liar's Poker barbarians seized control of the bond markets. In The New New Thing some guys from Silicon Valley redefined the American economy. Now, with his knowing eye and wicked pen, Michael Lewis reveals how the Internet boom has encouraged great change in the way we live, work, and think. He finds that we are in the midst of one of the greatest revolutions in the history of the world, and the Internet is a weapon in the hands of revolutionaries. The old priesthoods-lawyers, investment gurus, professionals in general-have been toppled. The amateur, or individual, is king: fourteen-year-old children manipulate the stock market; nineteen-year-old take down the music industry; and wrestlers get elected to public office. Deep, unseen forces seek to undermine all forms of collectivism, from the mass market to the family. Where does it all lead? And will we like where we end up?

This title is due for release on July 31, 2001
We'll send you an email as soon as it is available!