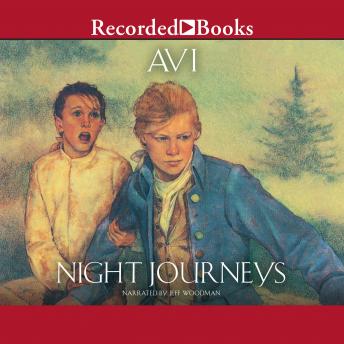 In this colonial adventure tale, set on the Pennsylvania-New Jersey border in 1768, Everett Shinn is enlisted in a search for two runaway indentured servants. Eager for adventure and to become a hero by capturing the runaways himself, 12-year-old Peter York, Shinn's adopted son, volunteers to join the search. Peter assumes that the runaways are swarthy ruffians. When he discovers, however, that they are mistreated children seeking freedom in Pennsylvania, Peter's purpose turns from capturing them to helping them escape. Will Shinn, a devout Quaker of few words, foil Peter's plans, or will the young man receive help from an unexpected source? Avi is an award-winning author. He has written two Newbery Honor books, won the Scott O'Dell Award for Historical Fiction, and an ALA Booklist Best Book of the 1980s. Narrator Jeff Woodman captures all the danger and excitement of this tightly-plotted suspense, and keeps the book moving as rapidly as the flooded Delaware River.

This title is due for release on January 3, 2014
We'll send you an email as soon as it is available!