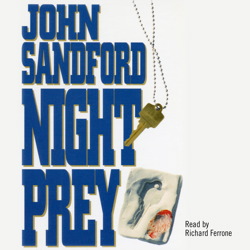 He was the best at what he did. A chameleon, invisible... uncatchable. For how could you catch an invisible man

After a two-year break, Lucas Davenport is back on the force and his first job is dealing with state investigator Meagan Connell. Determined to prove a link between a series of particularly brutal attacks on women, Meagan is struggling to be taken seriously. The cops are wary of her, the public thinks she's too political, the feminists thinks she's sold out.

But the more Lucas looks into it, the more he suspects that Meagan is right to fear the worst. Somewhere out there, spying on his unknowing victims at their most intimate moments, lurks a killer of unusual skill and savagery—and he’s only just getting warmed up…

“John Sandford knows all there is to know about detonating the gut-level shocks of a good thriller.” —The New York Times Book Review

“The best Lucas Davenport story so far. The man has a fine touch for outlaws.” —Stephen King on Golden Prey

“Sandford’s trademark blend of rough humor and deadly action keeps the pages turning until the smile-inducing wrap-up, which reveals the fates of a number of his quirky, memorable characters.” —Publishers Weekly on Golden Prey

“It appears there is no limit to John Sandford’s ability to keep new breath and blood flowing into his Lucas Davenport series. This is a series you must be reading if you are not already” —Bookreporter.com

“Sandford has always been at the top of any list of great mystery writers. His writing and the appeal of his lead character are as fresh as ever” —The Huffington Post