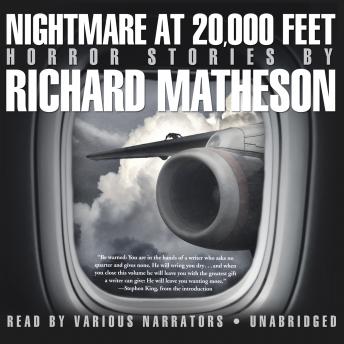 One of the finest and most influential horror writers of the twentieth century, Richard Matheson has left his stamp on the collective imagination. Here are more than twenty of Matheson's most memorable tales of fear and paranoia, personally selected by the author himself. Many of these stories have already entered into popular culture, including the title story, which became a landmark episode of The Twilight Zone, and 'Duel,' the nail-biting tale of man versus machines that inspired Steven Spielberg's first film.

Other stories include 'First Anniversary,' 'Dress of White Silk,' 'Witch War,' 'Dance of the Dead,' 'Mad House,' 'Prey,' 'Blood Son,' 'Crickets,' 'Wet Straw,' 'The Children of Noah,' 'Through Channels,' 'Old Haunts,' 'Disappearing Act,' 'The Holiday Man,' 'Legion of Plotters,' 'The Distributor,' 'Long Distance Call,' 'Slaughter House,' and 'The Likeness of Julie.' Find out why Stephen King (who writes the introduction) has called Matheson one of his favorite writers.