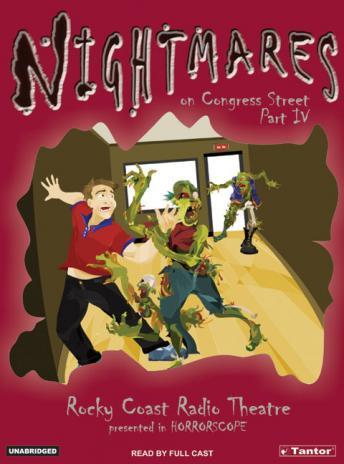 In 2001, a group of Portland, ME area theatrical professionals began creating a series of audio theatre programs - Nightmares on Congress Street 'classic horror stories to Chill & Thrill'. These productions have all been broadcast on Maine's NPR station for the past few Hallowe'en Eves. Now in it's fourth year, this production includes an original story, which is dedicated to Maine's very own 'Master of the Macabre', Stephen King.

Stories include:
* The Monkey's Paw by W.W. Jacobs
* The Cremation of Sam McGee by Robert W. Service
* The Cabin in the Woods by Clay T. Graybeal
* The Cask of Amontillado by Edgar Allan Poe
* The Librarian by Rhonda Carlson
* The Horror of Walker Point by Anthony S. Marino

'It's rare that I hear something modern that captures the spirit of Halloween. Sure, there's some scary stuff out there, and some funny scary stuff out there, but Nightmares on Congress Street really catches the fun spirit of Halloween. There are scares and laughs in good measure throughout, and you'd be hard-pressed to find better production quality anywhere.' -SFFaudio

This title is due for release on October 15, 2005
We'll send you an email as soon as it is available!