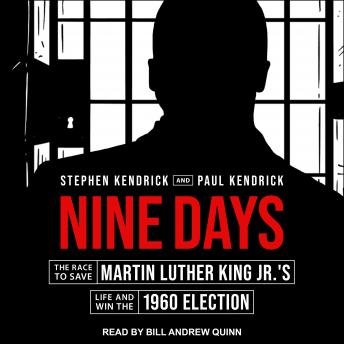 Nine Days: The Race to Save Martin Luther King Jr.'s Life and Win the 1960 Election

Less than three weeks before the 1960 presidential election, thirty-one-year-old Martin Luther King, Jr. was arrested at a sit-in at Rich's Department Store in Atlanta. That day would lead to the first night King had ever spent in jail-and the time that King's family most feared for his life.

While King's imprisonment was decried as a moral scandal in some quarters and celebrated in others, for the two presidential candidates-John F. Kennedy and Richard Nixon-it was the ultimate October surprise: an emerging and controversial civil rights leader was languishing behind bars, and the two campaigns raced to decide whether, and how, to respond.

Based on fresh interviews, newspaper accounts, and extensive archival research, Nine Days is the first full recounting of an event that changed the course of one of the closest elections in American history. Much more than a political thriller, it is also the story of the first time King refused bail and came to terms with the dangerous course of his mission to change a nation. At once a story of electoral machinations, moral courage, and, ultimately, the triumph of a future president's better angels, Nine Days is a gripping tale with important lessons for our own time.