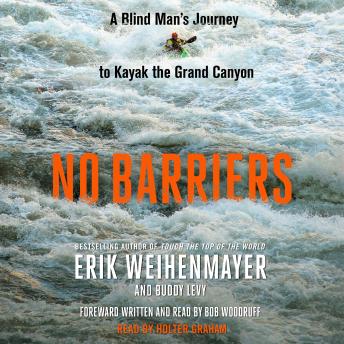 No Barriers: A Blind Man's Journey to Kayak the Grand Canyon

Erik Weihenmayer is the first and only blind person to summit Mount Everest, the highest point on Earth. Descending carefully, he and his team picked their way across deep crevasses and through the deadly Khumbu Icefall; when the mountain was finally behind him, Erik knew he was going to live. His expedition leader slapped him on the back and said something that would affect the course of Erik’s life: “Don’t make Everest the greatest thing you ever do.”

No Barriers is Erik’s response to that challenge. It is the moving story of his journey since descending Mount Everest: from leading expeditions around the world with blind Tibetan teenagers to helping injured soldiers climb their way home from war, from adopting a son from Nepal to facing the most terrifying reach of his life: to solo kayak the thunderous whitewater of the Grand Canyon.

Along the course of Erik’s journey, he meets other trailblazers—adventurers, scientists, artists, and activists—who, despite trauma, hardship, and loss, have broken through barriers of their own. These pioneers show Erik surprising ways forward that surpass logic and defy traditional thinking.

Like the rapids of the Grand Canyon, created by inexorable forces far beneath the surface, No Barriers is a dive into the heart and mind at the core of the turbulent human experience. It is an exploration of the light that burns in all of us, the obstacles that threaten to extinguish that light, and the treacherous ascent towards growth and rebirth.

This program includes a bonus interview with the author and his climbing partner as well as a forward read by Bob Woodruff.

No Barriers: A Blind Man's Journey to Kayak the Grand Canyon