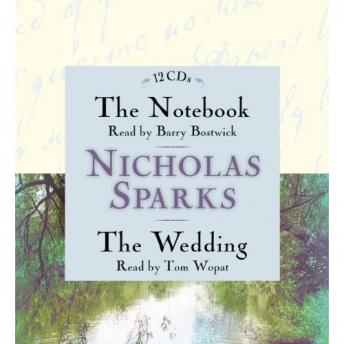 In The Notebook, Noah Calhoun is haunted by images of the girl he lost more than a decade earlier. At twenty-nine socialite Allie Nelson is about to marry a wealthy lawyer, but she cannot stop thinking about the boy long ago who stole her heart. Thus begins the story of a love do enduring and deep it can turn tragedy into triumph, and may even have the power to create a miracle. Also a 2004 award winning motion picture.

In The Wedding, Wilson Lewis hates admitting it, but the romance has vanished from his 30-year marriage. Can he learn from his in-laws, Allie and Noah Calhoun who've had a magnificent 50-year love affair and express his emotions? He's certain his love for Jane has only intensified. But can he make her fall in love with him again.

This title is due for release on September 25, 2006
We'll send you an email as soon as it is available!