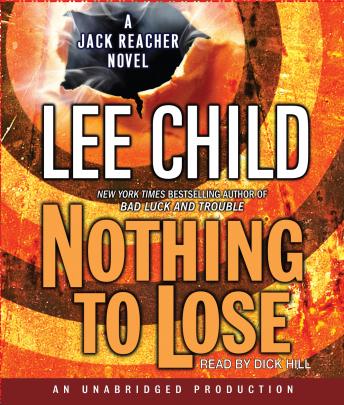 Nothing to Lose: A Jack Reacher Novel

Two lonely towns in Colorado: Hope and Despair. Between them, twelve miles of empty road. Jack Reacher never turns back. It's not in his nature. All he wants is a cup of coffee. What he gets is big trouble. So in Lee Child’s electrifying new novel, Reacher—a man with no fear, no illusions, and nothing to lose—goes to war against a town that not only wants him gone, it wants him dead.

It wasn’t the welcome Reacher expected. He was just passing through, minding his own business. But within minutes of his arrival a deputy is in the hospital and Reacher is back in Hope, setting up a base of operations against Despair, where a huge, seething walled-off industrial site does something nobody is supposed to see . . . where a small plane takes off every night and returns seven hours later . . . where a garrison of well-trained and well-armed military cops—the kind of soldiers Reacher once commanded—waits and watches . . . where above all two young men have disappeared and two frightened young women wait and hope for their return.

Joining forces with a beautiful cop who runs Hope with a cool hand, Reacher goes up against Despair—against the deputies who try to break him and the rich man who tries to scare him—and starts to crack open the secrets, starts to expose the terrifying connection to a distant war that’s killing Americans by the thousand.

Now, between a town and the man who owns it, between Reacher and his conscience, something has to give. And Reacher never gives an inch.

A different Jack Reacher. I felt uncomfortable with him being forceful with the female protagonist. He came across as a bully and his character certainly lost some respect in my eyes. Not my favourite by far. A let down after Bad Luck and Trouble.

This "Reacher" book was pretty much the same as the others. It seemed pretty implausible (as do they all); however, it is a great listen a we walk the neighborhoods during this Covid-19 lockdown. U agree with almost everyone else...........Dick Hill is the real Reacher! I couldn't imagine just reading it and not listening to Dick Hill.

Really enjoy the Reacher series especially when read by Dick Hill. Almost finished and hope Mr. Child's has more in the works. And hope Dick Hill will be the reader.

Great read until the end, when Reacher turns into a real tool. It was very uncomfortable the way he treated the female lead at the end. Then he becomes anti military. I would skip this book until there are no more to read/listen and your dyin for a Reacher story.

I agree with Rosemary. I didn't like this Reacher at all. Where is the Reacher we all love and want to read. I read every Child creation and have too high of an opinion of him to see him become so bitter (or is it only Reacher tiring of being our American hero). Get cooking on something uplifting will you Child? Your readers do not need more ugly anti-nationalism to bring them down.

another good reacher book. I only have two more in the series to listen to. I have enjoyed all twenty or so. none have disappointed me. I would recommend this book.

Well I listened to it twice to grasp the concepts. I like the series but character reacher seems to be changing. Other novels reacher does not push himself on women. This one he does. When a woman say no or does not seem interested he backs off not this time. Not sure why he insists this time?

We listen to audiobooks as we travel (retired). We saw the Jack Reacher movie and looked for the book. To our delight we found a whole series. We started listening to the books and got hooked. The we found Simply Audiobooks and started from the beginning to listen to all of them. We are delighted, but don't know what we will do when they run out. We have several favorite authors but have all but exhausted them also. Obviously we would recommend this series to everyone who likes action stories!

This my first Lee Child book, and despite my opinion of this one, I'll give him another shot. I like Reacher as a character; he reminds me of Spencer. But Child is not as economical as Robert B. Parker, nor as disciplined as a writer. I won't think of Child as a lazy writer until I listen to another. But this one, Nothing to Lose, has far to many lose ends, and so much essential to the narrative is simply not credible. The ending and the events surrounding it are just so far fetched as to be ridiculous. After a very promising beginning, Child is failed by his editor, allowing him to drift on and on and extend sequences that are in need of cutting. Many questions raised by the narrative are left unanswered, like how are Despair's townspeople involved in either of the two plot lines? Kind of important. Is the purpose of this book to memorialize Reacher or to tell a plausible story. The latter can certainly be achieved without harming Reacher's stature in any way.

This is a pretty good Reacher story. I wish that it were not abridged as Dick Hill is such a very good narrator/reader.

Lee Child has written a dozen or so Jack Reacher books, yet this one is fresh and different, and has some deeply thought-provoking moments, along with an excellent plot and interesting characters. Definitely one of his better novels.

This title is due for release on June 3, 2008
We'll send you an email as soon as it is available!