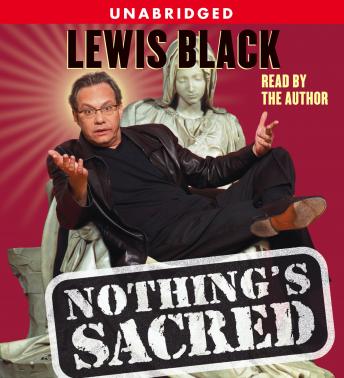 You've seen him on The Daily Show with Jon Stewart offering up his trademark angry observational humor on everything from politics to pop culture. You've seen his energetic stand-up performances on HBO, Comedy Central, and in venues across the globe. Now, for the first time, Lewis Black translates his volcanic eruptions into book form in Nothing's Sacred, a collection of rants against stupidity and authority, which oftentimes go hand in hand.

With subversive wit and intellectual honesty, Lewis examines the events of his life that shaped his antiauthoritarian point of view and developed his comedic perspective. Growing up in 1950s suburbia when father knew best and there was a sitcom to prove it, he began to regard authority with a jaundiced eye at an early age. And as that sentiment grew stronger with each passing year, so did his ability to hone in on the absurd.

True to form, he puts common sense above ideology and distills hilarious, biting commentary on all things politically and culturally relevant. 'No one is safe from Lewis Black's comic missiles.' (New York Times)

You have been warned....

Having Lewis Black read this book was probably the best decision anyone made. Without his inflection, I'm just not sure the book would be anywhere near as funny. Not, the book itself wasn't what I expected. I figured it'd be the rantings of a mad man like his stand-up, but there was actually more substance in the beginning. He shares some of his life, but always with the humor. If you like his stand-up you should like this book.

I enjoyed this a lot. While it is very different from Lewis Black's stand-up in some ways, that's not a bad thing. I enjoyed learning about the life that made him who he is today.

This book is great! I actually read it and it is amazing that Lewis Black is able to put his strong peronality and ranting in a book. I could hear his voice the whole time. I read that someone said it was more about his life and that seemed self-absorbed. I thought that was what the book was supposed to be about when reading it so I don't find it self-absorbed at all. He is honest and funny when bringing up many times in history that he witnessed and the foolishness, shock or both that were involved with that particular event. The chapters or subjects are quick and to the point. Very easy reading with many a laugh-out-loud moment.

I must disagree with the previous reviews. I found this book to be quite enjoyable. It is not as funny as his stand up routines - it isn't meant to be. This is not a stand up routine, it is a biography. I think Lewis Black has some very interesting perspectives and makes a lot of good points in a witty (and slight sarcastic) way. I found this book informative, entertaining and quite enjoyable!

Not as good as when he is on Jon Stewart's show. Stories from college was kind of blah.

I love Lewis Black. He is one of my favorite comedians. However, this is mostly his life story, and it is boring, self-absorbed, and uninteresting. Do not waste your time with this book!

Let me start by saying that I think Lewis Black is one of the funniest comedians around today. For me, his political commentary just strikes a chord that never fails to make me laugh. So I REALLY wanted to like this book. But I didn't. Don't let the description fool you - this book is ONLY his life story. There is very little of the biting satire that he exhibits in his standup within the pages of this book. Frankly I was bored. The few moments of comedic observations are ones I've heard on the Daily Show or in his standup specials on Comedy Central. If you like Lewis' comedy, DO NOT rent this book.

I love Lewis Black. I have enjoyed his stand up routines and his appearances on the Daily Show. His book, however, is a flop. It is terribly written, boring and unfunny. I listened for 45 minutes, didn't once break a smile and then stopped it and returned it. It's random, pointless and monotonous. Avoid this one.