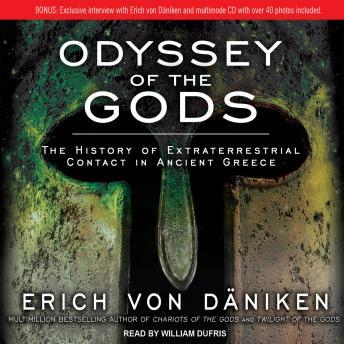 Odyssey of the Gods: The History of Extraterrestrial Contact in Ancient Greece

Legendary UFO expert Erich von Daniken stirs up another controversy with an imaginative supposition: What if the myths of ancient Greece were attempts to describe events that really happened? What if ancient peoples were visited, not by imaginary gods and goddesses, but by extraterrestrial beings who arrived on earth thousands of years ago? The author's research into both ancient mythology and current archaeological discoveries leads him to some explosive hypotheses. He suggests that the best explanation of such creatures as centaurs and Cyclops, as well as stories about the lost continent of Atlantis and wars among the deities, may be efforts by artists of the times to record never-before-seen phenomena. Dozens of ancient sculptures and temple decorations, von Daniken points out, look surprisingly similar to equipment used by today's astronauts. Could these be long-lost secrets, being rediscovered by scientists today?

It confirmed my opinion of both mankind and those that they thought of as Gods. 1. Man did not then nor even now, understand the true concept of GOD. 2. Men that were considered Gods were mortal men of great stature, bravery, deeds and even possibly from the stars - BUT - they were not Gods. This book tells me that ancient men especially saw men of great stature or of great deeds as being superhuman. They (mankind) obviously were personally unable to perform such feats or even fearful of performing such feats that they idolized those that "could" and "would" do so. 3. Personally, I feel strongly that there were aliens (for lack of a better definition) that did indeed inhabit the earth and we were in fear of them and therefor idolized them, without really understanding Who or What they really were.

This title is due for release on October 24, 2011
We'll send you an email as soon as it is available!