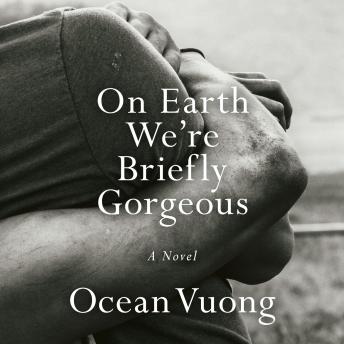 Longlisted for the 2019 National Book Award for Fiction, the Carnegie Medal in Fiction, the 2019 Aspen Words Literacy Prize, and the PEN/Hemingway Debut Novel Award

Shortlisted for the 2019 Center for Fiction First Novel Prize

Winner of the 2019 New England Book Award for Fiction!

Named one of the most anticipated books of 2019 by Vulture, Entertainment Weekly, Buzzfeed, Los Angeles Times, Boston Globe, Oprah.com, Huffington Post, The A.V. Club, Nylon, The Week, The Rumpus, The Millions, The Guardian, Publishers Weekly, and more.

“A lyrical work of self-discovery that’s shockingly intimate and insistently universal…Not so much briefly gorgeous as permanently stunning.” —Ron Charles, The Washington Post

Poet Ocean Vuong’s debut novel is a shattering portrait of a family, a first love, and the redemptive power of storytelling

On Earth We’re Briefly Gorgeous is a letter from a son to a mother who cannot read. Written when the speaker, Little Dog, is in his late twenties, the letter unearths a family’s history that began before he was born — a history whose epicenter is rooted in Vietnam — and serves as a doorway into parts of his life his mother has never known, all of it leading to an unforgettable revelation. At once a witness to the fraught yet undeniable love between a single mother and her son, it is also a brutally honest exploration of race, class, and masculinity. Asking questions central to our American moment, immersed as we are in addiction, violence, and trauma, but undergirded by compassion and tenderness, On Earth We’re Briefly Gorgeous is as much about the power of telling one’s own story as it is about the obliterating silence of not being heard.

With stunning urgency and grace, Ocean Vuong writes of people caught between disparate worlds, and asks how we heal and rescue one another without forsaking who we are. The question of how to survive, and how to make of it a kind of joy, powers the most important debut novel of many years.

This book is a somewhat enjoyable memoir of a young gay man’s teenage years and his first true love with another slightly older boy. There are also long passages regarding his relationship with his grandmother and his abusive, possibly bipolar mother. It has somewhat graphic depictions of his sexual relationship with his friend, so keep that in mind if this could make you uncomfortable. The biggest obstacle of this book to get over however was listening to the narrator’s voice. He is very delicate and reminiscent of Michael Jackson. Be sure to listen to the audio sample before purchasing.

For me this was a poetic stream of thoughts that ultimately inform the reader about the life of Ocean, his mother, and grandparents. There were some beautiful, moving passages but overall it was hard to follow. The story is almost told in a spiral rather than any timeline. I appreciate how candid the author is in sharing his life story. Unfortunately, the narration didn’t work for me. I felt as if he was whispering his way through and it became quite annoying.

I had a hard time getting through this book, although it was beautifully written. It was very sad and the narrator sounded so desperate always. The writer certainly is aware of life and each word was carefully chosen. Just not my cup of tea.

Amazing writing. Telling of mental illnesses in the subaltern marginalized voice. A bit more sexually explicit than I expected though.