One Day in the Life of Ivan Denisovich: A Novel 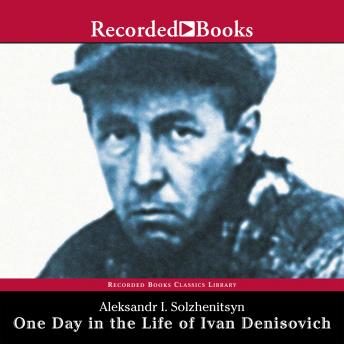 Aleksandr I. Solzhenitsyn's startling book led, almost 30 years later, to Glasnost, Perestroika, and the 'Fall of the Wall.' One Day in the Life of Ivan Denisovich brilliantly portrays a single day, any day, in the life of a single Russian soldier who was captured by the Germans in 1945 and who managed to escape a few days later. Along with millions of others, this soldier was charged with some sort of political crime, and since it was easier to confess than deny it and die, Ivan Denisovich 'confessed' to 'high treason' and received a sentence of 10 years in a Siberian labor camp. In 1962, the Soviet literary magazine, Novy Mir, published a short novel by an unknown writer named Solzhenitsyn. Within 24 hours, all 95,000 copies of the magazine containing this story were sold out. Within a week, Solzhenitsyn was no longer an obscure math teacher, but an international celebrity. Publication of the book split the Communist hierarchy, and it was Premier Khrushchev himself who read the book and personally allowed its publication.

One Day in the Life of Ivan Denisovich: A Novel

This title is due for release on March 1, 2013
We'll send you an email as soon as it is available!