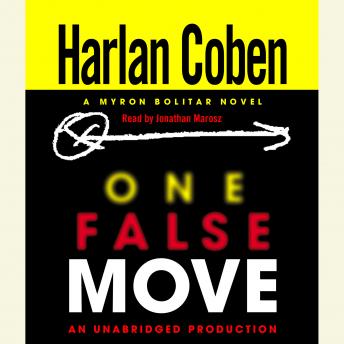 She's smart, beautiful, and she doesn't need a man to look after her. But sports agent Myron Bolitar has come into her life—big time. Now Myron's next move may be his last. . .

Brenda Slaughter is no damsel in distress. Myron Bolitar is no bodyguard. But Myron has agreed to protect the bright, strong, beautiful basketball star. And he's about to find out if he's man enough to unravel the tragic riddle of her life.

Twenty years before, Brenda's mother deserted her. And just as Brenda is making it to the top of the women's pro basketball world, her father disappears too. A big-time New York sports agent with a foundering love life, Myron has a professional interest in Brenda. Then a personal one. But between them isn't just the difference in their backgrounds or the color of their skin. Between them is a chasm of corruption and lies, a vicious young mafioso on the make, and one secret that some people are dying to keep—and others are killing to protect....

Praise for One False Move

“Consistently entertaining . . . Coben moves himself into the front ranks of mystery fiction alongside heavy hitters like Robert B. Parker, Sue Grafton and Robert Crais.”—Houston Chronicle

I love HC books and have read all the stand alone books and now I decided to listen to the Myron Bolitar series. I have liked all of them so far but this one fell short for me. I feel like something was missing in this one. Narrator fantastic as ALWAYS! One of the best out there.

I wasn't overly happy with how it ended but I was surprised who the killer was. I just think it could have been a happier ending.

Another great Myron Bolitar novel. The narrator is phenomenal!

Witty and tragic all at the same time. Myrons one liners keep you laughing while he investigates yet another situation that will lead him to tragedy.

This title is due for release on April 11, 2006
We'll send you an email as soon as it is available!