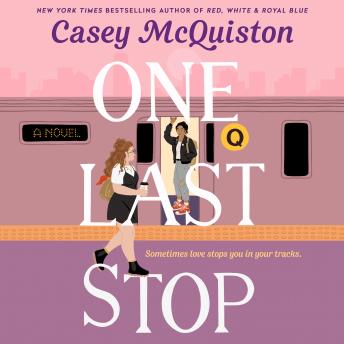 'Lives are remade in McQuiston's LGBTQ, paranormal rom-com. Memorable characters
(including N.Y.C. itself) and a sultry-comic seduction on public transit (rivaling the iconic Risky Business scene) will have listeners hooked.' -- BookPage, Starred Review

From the New York Times bestselling author of Red, White & Royal Blue comes a new romantic comedy that will stop listeners in their tracks...

For cynical twenty-three-year-old August, moving to New York City is supposed to prove her right: that things like magic and cinematic love stories don’t exist, and the only smart way to go through life is alone. She can’t imagine how waiting tables at a 24-hour pancake diner and moving in with too many weird roommates could possibly change that. And there’s certainly no chance of her subway commute being anything more than a daily trudge through boredom and electrical failures.

But then, there’s this gorgeous girl on the train.

Jane. Dazzling, charming, mysterious, impossible Jane. Jane with her rough edges and swoopy hair and soft smile, showing up in a leather jacket to save August’s day when she needed it most. August’s subway crush becomes the best part of her day, but pretty soon, she discovers there’s one big problem: Jane doesn’t just look like an old school punk rocker. She’s literally displaced in time from the 1970s, and August is going to have to use everything she tried to leave in her own past to help her. Maybe it’s time to start believing in some things, after all.

Casey McQuiston’s One Last Stop is a magical, sexy, big-hearted romance where the impossible becomes possible as August does everything in her power to save the girl lost in time.

'A dazzling romance, filled with plenty of humor and heart.' - Time Magazine, 'The 21 Most Anticipated Books of 2021'

'Dreamy, other worldly, smart, swoony, thoughtful, hilarious - all in all, exactly what you'd expect from Casey McQuiston!' - Jasmine Guillory, New York Times bestselling author of The Proposal and Party for Two

I absolutely enjoyed this one. The plot twists were incredible and couldn’t help but awww at Jane and August. First love with unfortunate circumstances? Sign me up

So funny and witty and hot. Also one of the best narrated audiobooks I've listened.

Very great story couldn’t stop listening and cried a bit in the final chapters. But the narrator did this kind of deep male voice for Jane and Augusts mum, that was very annoying to me.

August is new to New York Cafe, and everything seems to be turning out bad. At the end of a bad day, August finds herself in the subway close to crying. That's when August meets Subway Girl, Jane. I liked this book, August and Jane is just so cute. I think Jane came into August's life right when she needed someone. I know this is Casey's second book and I have high hopes for Red, White & Royal Blue. So far I am loving the writing style and I definitely will read/listen to anything she writes. Highly recommended.

I really enjoyed the book! It was very sweet and romantic. The narrator was good but completely butchered the cook's Brooklyn accent.

This book is so good i haven’t stopped thinking about it. As a sapphic 22 year old woman, this book is everything i wanted and deserved in a book and never got to have. This book is so beautiful and the first representation of sapphic love and life as just that, an experience you live forever and I’m crying about it still after two days.

Truly one of the best books I've read in a long time. I will be recommending this one for years to come.