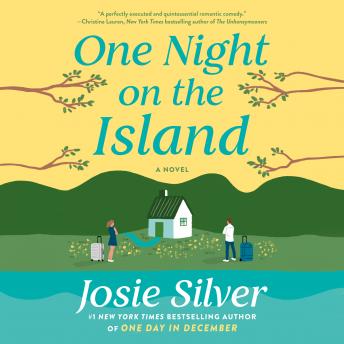 One Night on the Island: A Novel

From the #1 New York Times bestselling author of One Day in December . . . When a double-booking at a remote one-room cabin accidentally throws two solace seekers together, it feels like a cruel twist of fate. But what if it’s fate of a different kind?

“A perfectly executed and quintessential romantic comedy.”—Christina Lauren, author of The Unhoneymooners

Spending her thirtieth birthday alone is not what dating columnist Cleo Wilder wanted, but she plans a solo retreat―at the insistence of her boss―in the name of re-energizing herself and adding a new perspective to her column. The remote Irish island she’s booked is a far cry from London, but at least it’s a chance to hunker down in a luxury cabin and indulge in some self-care while she figures out the next steps in her love life and her career.

Mack Sullivan is also looking forward to some time to himself. With his life in Boston deteriorating in ways he can’t bring himself to acknowledge, his soul-searching has brought him to the same Irish island to explore his roots and find some clarity. Unfortunately, a mix-up with the bookings means both have reserved the same one-room hideaway on exactly the same dates.

Instantly at odds, Cleo and Mack don’t know how they’re going to manage until the next weekly ferry arrives. But as the days go by, they no longer seem to mind each other’s company quite as much as they thought they would.

Written with Josie Silver’s signature charm, One Night on the Island explores the meaning of home, the joys of escape, and how the things we think we want are never the things we really need.