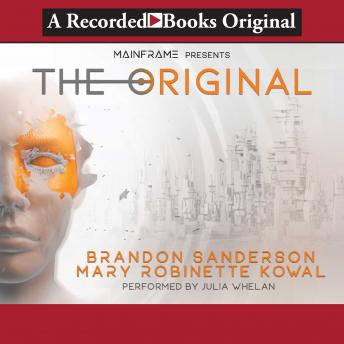 Hugo Award–winning authors Brandon Sanderson and Mary Robinette Kowal team up in this exclusive audio-first
production of The Original, a sci-fi thriller set in a world where one woman fights to know her true identity and survive
the forces that threaten her very existence.

In the near future, humans choose life—for a price.

Injectable nanite technology is the lifeblood that flows through every individual wishing to experience the world through the
lens of their own theme. While death from mortal wounds is still possible, life is made easier in a socially liberated society where
automation and income equality allow passion pursuits to flourish over traditional work. Renewal stations are provided to every
law-abiding citizen for weekly check-ins, which issue life-sustaining repairs in exchange for personal privacy. But what becomes
of those who check out, of those who dare to resist immortality and risk being edited under the gaze of an identity-extracting
government surveillance system?

When Holly Winseed wakes up in a hospital room, her memory compromised and a new identity imposed on her, a team of
government agents wastes no time stating their objective. With intent to infiltrate and defeat the terrorist group ICON, the agents
tell Holly that she is now a Provisional Replica and has one week to hunt down and kill her Original for the murder of her husband,
Jonathan. If she succeeds, she’ll assume her Original’s place in society. If she fails, her life will end.

Holly’s progress is monitored by an assigned contact that feeds her information as she confronts the blank, robotic world
around her, discovering that others view life through the theme of their own choosing. With her newly implanted combat and
deduction skills, Holly fends off both attacks by terrorists and doubts about her own trustworthiness as clues lead her to her
Original—and to the truth about Jonathan.

In the end, one body remains and one walks away. Although questions persist, one thing is certain: life will never be the same.

Not too sure where to begin. I enjoyed everything! It was fast paced and narrated beautifully. I really can't find anything negative to add but also wasn't looking for any... Great story telling! Definately would recommend it

I really enjoyed this short story! The narration was great. This is the first “graphic” audiobook I have listened to, and, while I wasn’t sure about it at first, I did end up enjoying the music and sound effects. The overall story is interesting, and I was surprised how well the world building was for such a short story (I am very used to a typical Sanderson book). I noticed some pushback about the use of “they/them” pronouns for reference to a non-binary character, and while you may not like it grammatically, from an inclusion standpoint it is nice to see the authors bringing inclusivity and diversity into the book. There is not a huge emphasis placed on it in the book, which makes it even better in my opinion. The overall story arc was good for a short story. It was a fun little mystery with a few twists and turns. I would 100% recommend it as a nice quick listen.

Let's get the good first: Narration was great and the story premise hooked me. The not so good: Everything else. So this book was written for audio, fine. Are audiobook "listeners" dumb? Because we get so many repetitions of the protagonist emotions and thoughts that the authors must think we're dumb and can't remember what was said. Second, I can't count the times I had to stop the narration to tell myself: That makes no sense. I won't go into details since I want this review to be spoiler free, but so many things in the story makes no sense as it goes along that by the end, frustration at those was at an all time high. Third: the word "they" used for transgenre. Why, oh why? It's the second book I see Mr Sanderson using that pronoun for such a character, and I still cringe to no end. It makes reading/listening impossible! I mean, just take this sentence: "I tried to grapple their arm but they fought back." Uh, what, I have to rewind, 'cause I was sure she was fighting against only one opponent... Wait, she is fighting only against one, what the hec... OH, isn't she fighting the character that was mentioned as being transgenre..? My thought on this is that we must have become really stupid as a society that we cannot invent new words to describe new reality instead of trying to re-purpose plural pronoun to describe a singular person like in this case. Fourth: The music. It was actually very nice at first, then you notice it's repeated ad nauseum. Fifth: The ending was.. bleh. The message to self.. Come one, who will listen to it? Sixth: While the narrating was very good, sometimes it got confusing because there are only so many variations in a voice someone can do. So, most male narrators had the same tone, and the chapters where the protagonist talks to her original...woaw, confusing. All in all, a real disappointment and a failed experiment.. Hint to audiobook producers: We now get free podcast with real actors acting a real story on audio, so how come audiobooks are narrated only by one person, doing all the voices instead of having maybe 2-3 persons to narrate? Cost? Again, free podcast with a full cast. They must make the money somehow, so how come audiobooks can't?

This story had a very good premise, although the world seemed a little unbelievable, but the ending was absolutely fantastic, one of the best I’ve heard in a long time. The premise was very good, it meant to a very interesting story arc, with a deep main character that you could easily feel for. The world the story was set in however felt very unbelievable. The story is set on earth in what seems around the year 2080-2100, although that is never explicitly stated it seems around that time period as furniture from the year 2010 is described as retro and fitting in an average apartment. The technology however, just seems way too advanced, and too... unethical I guess? There is wide set cloning and a technology system where these things called nanites allow people to change how they see the world through their eyes to be however they want it, and leave them functionally immortal, along with one united world government that has total control over all this technology. For me it was just hard to believe that anything like this could happen in just 80 years and I feel it would have been more believable, and thus more immersive, if set on a different planet, or it was specified that this was some other dimension or something like that. Despite this, the background audio and narrator was incredibly good and made up for the lost believability so I could still feel thoroughly immersed. Finally, the ending was soooooo good. It was definitely one of the best I’ve read/heard in a long time. It was the perfect culmination of the events of this book and left me breathless, just thinking “wow”.

Good interesting read. Brandon does a good job with the pacing and gives enough to make this short story complete, while making you want more of the world.

I love Sanderson's work and picked this up at a discount -- was somewhat sceptical at first, but the story is brilliantly immersive even though the society within the story is vastly different from ours...

Fantastic writing and narration. A really engaging short that shows what the medium can do. Brandon should team up with Mary Robinette more often.

I really enjoyed it, except the ending just left too many questions for my liking. I can see that was an intentional choice, but I don't much like it. The story and the worldbuilding and everything was fantastic, though - I would definitely love to hear more stories from this fascinating future world.

I loved it . It grabbed me from the start .

This could be a nice mini series.

This title is due for release on September 14, 2020
We'll send you an email as soon as it is available!