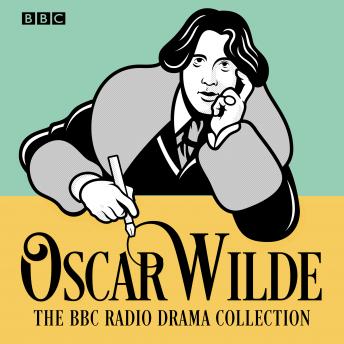 The collected BBC radio productions of the major works of Oscar Wilde, plus bonus play by Neil Bartlett

Loved for his flamboyant personality, sparkling wit and brilliant epigrams, Oscar Wilde was a comic genius and a literary icon.

This collection reflects the many facets of his dazzling talent. Here are dramatisations of his only novel, The Picture of Dorian Gray, a Gothic tale of a gilded aristocrat who makes a dangerous pact, as well as four scintillating social comedies – Lady Windermere’s Fan, A Woman of No Importance, The Importance of Being Earnest and An Ideal Husband. Among the distinguished casts are Ian MacDiarmid, Joely Richardson, Edward Fox, Diana Rigg, Martin Clunes, Michael Hordern and Judi Dench.

Moving examples of his correspondence are revealed in The Letters of Oscar Wilde and De Profundis, read by Simon Callow and Simon Russell Beale respectively, and his most famous poem, The Ballad of Reading Gaol, is performed live by stars including Ian McKellen, Neil Tennant and Stephen Fry.

In addition, a bonus drama, In Extremis by Neil Bartlett, starring Corin Redgrave and Sheila Hancock, reimagines Oscar Wilde's hastily arranged sitting with a society palm reader, a week before the trial that would cost him so dearly.

A superbly acted, amazing compilation of Oscar Wilde works. As these are performed “readings” by highly skilled British actors, some of the works (such as The Picture of Dorian Gray) are not 100% Wilde’s work, word for word; there is some adaptation going on. They’re still wonderful. I perhaps loved hearing his plays the most: Lady Windermere’s Fan, An Ideal Husband and, of course, The Importance of Being Earnest, are the sparkling jewels in the group, performances I will be happy to return to over and over. I am left thinking longest about De Profundis, The Ballad of Reading Gaol, and the good handful of letters that take us through Wilde’s life. The only jarring note was the addition of In Extremis at the end; it’s not Wilde’s work so it’s completely unnecessary. But well acted so worth a listen. I skipped most of it, preferring to end with the heart-rending Ballad that Wilde originally published with his dehumanized prisoner number as author. Everything is so beautifully narrated in this anthology. Oscar Wilde the joyous romantic, witty cynic and tragic victim to a horrifying legal system that catered to vindictive aristocrats springs to memorable life alongside his wonderful, amazing characters. One of the best audiobooks I’ve ever listened to. Pure listening treasure!

This title is due for release on April 4, 2019
We'll send you an email as soon as it is available!