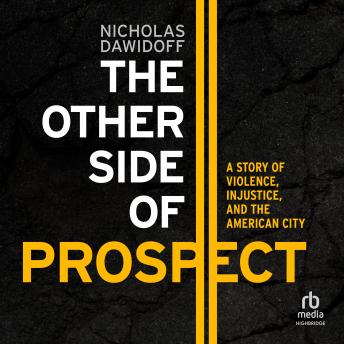 The Other Side of Prospect: A Story of Violence, Injustice, and the American City

One New Haven summer evening in 2006, a retired grandfather was shot point-blank by a young stranger. A hasty police investigation culminated in innocent sixteen-year-old Bobby being sentenced to prison for thirty-eight years. New Haven native Nicholas Dawidoff returned home and spent eight years reporting the deeper story of this injustice, and what it reveals about the enduring legacies of social and economic disparity.

In The Other Side of Prospect, he has produced an immersive portrait of a seminal community in an old American city now beset by division and gun violence. Tracing the histories of three people whose lives meet in tragedy-victim Pete Fields, likely murderer Major, and Bobby-Dawidoff describes optimistic families coming north from South Carolina as part of the Great Migration, for the promise of opportunity and upward mobility, and the harrowing costs of deindustrialization and neglect. Foremost are the unique challenges confronted by children like Major and Bobby coming of age in their 'forgotten' neighborhood, steps from Yale University. After years in prison, with the help of a true-believing lawyer, Bobby is finally set free. His subsequent struggles with the memories of prison, and his heartbreaking efforts to reconnect with family and community, exemplify the challenges the formerly incarcerated face upon reentry into society.

This title is due for release on November 8, 2022
We'll send you an email as soon as it is available!