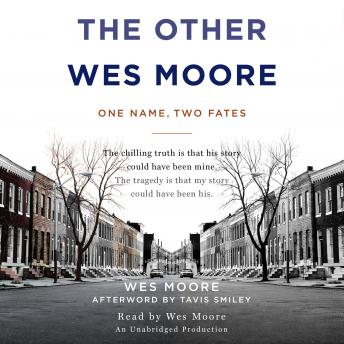 The Other Wes Moore: One Name, Two Fates

NEW YORK TIMES BESTSELLER • From the governor-elect of Maryland, the “compassionate” (People), “startling” (Baltimore Sun), “moving” (Chicago Tribune) true story of two kids with the same name from the city: One went on to be a Rhodes Scholar, decorated combat veteran, White House Fellow, and business leader. The other is serving a life sentence in prison.

In December 2000, the Baltimore Sun ran a small piece about Wes Moore, a local student who had just received a Rhodes Scholarship. The same paper also ran a series of articles about four young men who had allegedly killed a police officer in a spectacularly botched armed robbery. The police were still hunting for two of the suspects who had gone on the lam, a pair of brothers. One was named Wes Moore.

Wes just couldn’t shake off the unsettling coincidence, or the inkling that the two shared much more than space in the same newspaper. After following the story of the robbery, the manhunt, and the trial to its conclusion, he wrote a letter to the other Wes, now a convicted murderer serving a life sentence without the possibility of parole. His letter tentatively asked the questions that had been haunting him: Who are you? How did this happen?

That letter led to a correspondence and relationship that have lasted for several years. Over dozens of letters and prison visits, Wes discovered that the other Wes had had a life not unlike his own: Both had had difficult childhoods, both were fatherless; they’d hung out on similar corners with similar crews, and both had run into trouble with the police. At each stage of their young lives they had come across similar moments of decision, yet their choices would lead them to astonishingly different destinies.

Told in alternating dramatic narratives that take readers from heart-wrenching losses to moments of surprising redemption, The Other Wes Moore tells the story of a generation of boys trying to find their way in a hostile world.

Excellent telling of a story that "collapses the distance between worlds." Hearing it from Mr. Moore is a powerful way to understand and experience this story.

Had to read this for a class, a very moving and sobering book. Excellent.

I really like it surprisingly...would have never picked it myself ...kinda had to for class but it's pretty good ?

Good book. I like the way he put the book into very nice detail.

This title is due for release on April 27, 2010
We'll send you an email as soon as it is available!