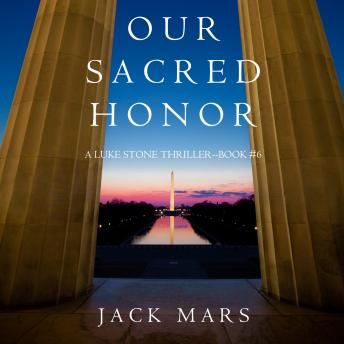 “One of the best thrillers I have read this year. The plot is intelligent and will keep you hooked from the beginning. The author did a superb job creating a set of characters who are fully developed and very much enjoyable. I can hardly wait for the sequel.”
--Books and Movie Reviews, Roberto Mattos (re Any Means Necessary)

OUR SACRED HONOR is book #6 in the bestselling Luke Stone thriller series, which begins with ANY MEANS NECESSARY (book #1), a free download with over 500 five star reviews!

When China bankrupts the U.S. economy by calling in its debt and by shutting down the South China Sea, Americans are desperate for radical change. President Susan Hopkins, running for re-election, is floored as she watches the returns come in. Her rival, a madman senator from Alabama who ran on the promise to deport all Chinese and to nuke China’s ships out of the South China Sea, has, inconceivably, won.

President Hopkins, though, knows she cannot yield power. To do so would be to spark World War Three.

Knowing the election was stolen, President Hopkins needs 48 hours to prove it, and to stop the escalating war games with the Chinese. With no one left to turn to, she summons Luke Stone, the former head of an elite FBI para-military team. The stakes could not be higher as she commands him to save America from its greatest threat: its own President Elect.

Yet as one shocking twist follows another, it may, even for Luke Stone, be too late.

A political thriller with non-stop action, dramatic international settings and heart-pounding suspense, OUR SACRED HONOR is book #6 in the bestselling and critically-acclaimed Luke Stone series, an explosive new series that will leave you turning pages late into the night.

“Thriller writing at its best. Thriller enthusiasts who relish the precise execution of an international thriller, but who seek the psychological depth and believability of a protagonist who simultaneously fields professional and personal life challenges, will find this a gripping story that's hard to put down.”
--Midwest Book Review, Diane Donovan (regarding Any Means Necessary)

Book #7 in the Luke Stone series will be available soon.

This title is due for release on May 21, 2020
We'll send you an email as soon as it is available!