Pairing with the Protector: A Kindred Tales Novel 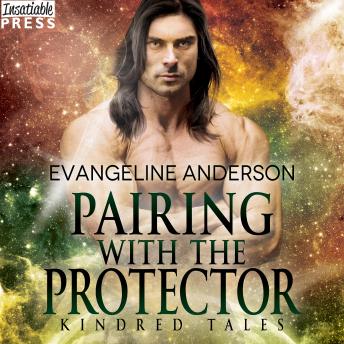 A woman on a dangerous mission to a new worldA warrior sworn to protect her, who fears to risk his heartCan Whitney and Rafe escape from the giant beings who have captured them?And will Whitney end up...Pairing With her Protector?Dr. Whitney Washington is a Xeno-zoologist living on the Kindred Mother Ship and she has a big problem--she has a crush on her bodyguard. Unfortunately, the big Beast Kindred who comes with her to dangerous planets to protect her clearly doesn't return her interest...or does he?Rafe is a warrior with a past--a bad one. He has been hurt before when dealing with females and he doesn't intend to repeat the experience. But it's hard to ignore Whitney's beauty and bubbly personality. Still, he's determined to try until an unexpected turn in their latest trip to a new planet for research changes everything.Forced to land on an unknown world, Whitney and Rafe find themselves among a group of feral humanoids who seem to be about as smart as house cats. Soon they are mistaken for pets by the huge aliens who live on the planet and taken into captivity as a "mating pair." But what will happen when Rafe and Whitney actually have to mate in order to escape?You'll have to read, Pairing With the Protector to find out...

Pairing with the Protector: A Kindred Tales Novel