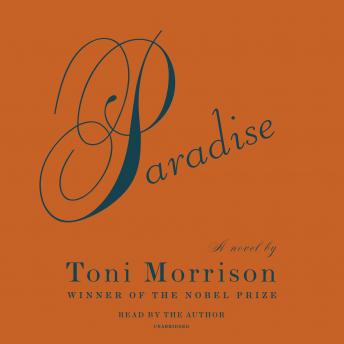 "Rumors had been whispered for more than a year. Outrages that had been accumulating all along took shape as evidence. A mother was knocked down the stairs by her cold-eyed daughter. Four damaged infants were born in one family. Daughters refused to get out of bed. Brides disappeared on their honeymoons. Two brothers shot each other on New Year's Day. Trips to Demby for VD shots common. And what went on at the Oven these days was not to be believed . . . The proof they had been collecting since the terrible discovery in the spring could not be denied: the one thing that connected all these catastrophes was in the Convent. And in the Convent were those women."

In Paradise--her first novel since she was awarded the Nobel Prize for Literature--Toni Morrison gives us a bravura performance. As the book begins deep in Oklahoma early one morning in 1976, nine men from Ruby (pop. 360), in defense of "the one all-black town worth the pain," assault the nearby Convent and the women in it. From the town's ancestral origins in 1890 to the fateful day of the assault, Paradise tells the story of a people ever mindful of the relationship between their spectacular history and a void "Out There . . . where random and organized evil erupted when and where it chose." Richly imagined and elegantly composed, Paradise weaves a powerful mystery.