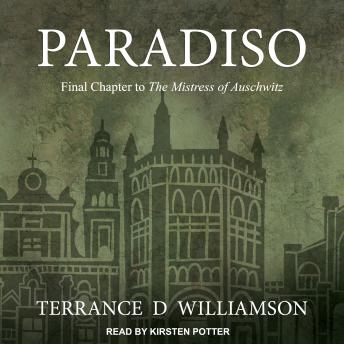 #3 of Mistress of Auschwitz

In this final chapter to The Mistress of Auschwitz, Eleonore struggles with the consequences of her actions at Mrs. Meyers's manor. While in a foreign land, Eleonore begins to hope for what she thought had been lost forever. She begins to find healing through a wonderfully chaotic but passionate family, learning to use her gifts again, and an unsought romance with a man that she once despised. But all is not as it seems, as the fascist ideology which should've been long buried has resurrected itself in the hearts of lesser men. Eleonore must yet again contend with that evil. Still, she persists with the understanding that the darkness will always succumb to the light.

Meanwhile, Captain Volker is devastated by what he perceives are a series of personal defeats. To atone for his supposed shortcomings, Hanns presses the search for Rudolph Hoess, the Commandant of Auschwitz, with unrelenting fervor in the hopes that he can finally bring this devil to justice. His ambition, however, leads him down paths where he will stop at nothing, no matter who gets in his way, in his attempt to capture the greatest mass murderer in the history of mankind. Still, his mind lingers on Eleonore and her well-being, as Hanns realizes her importance should Rudolph be brought to trial.