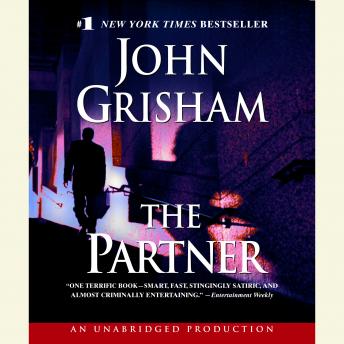 The Partner: A Novel

#1 NEW YORK TIMES BEST SELLER • Once he was a well-liked, well-paid young partner in a thriving Mississippi law firm. Then Patrick Lanigan stole ninety million dollars from his own firm—and ran for his life.

They watched Danilo Silva for days before they finally grabbed him. He was living alone, a quiet life on a shady street in Brazil; a simple life in a modest home, certainly not one of luxury. Certainly no evidence of the fortune they thought he had stolen. He was much thinner and his face had been altered. He spoke a different language, and spoke it very well. But Danilo had a past with many chapters.

Four years earlier he had been Patrick Lanigan, a young partner in a prominent Biloxi law firm. He had a pretty wife, a new daughter, and a bright future. Then one cold winter night Patrick was trapped in a burning car and died a horrible death. When he was buried his casket held nothing more than his ashes.From a short distance away, Patrick watched his own burial. Then he fled. Six weeks later, a fortune was stolen from his ex-law firm's offshore account. And Patrick fled some more. But they found him.

Good book. Lots of suspense. I liked this as well as al the other books he has written. Ending leaves opening for 2nd book

I have read several of Mr Grisham books and this is so far my best read/audio book yet.

the author sucks you in. tosses you around like a rag doll. You do not see the ending coming. Wonderful book.

I liked this book as I do most of Grisham's work, but I didn't like the ending. I had hoped for better things, but did enjoy his track to freedom.

Sorry folks, but I found this one to be a dud. If you are looking for a really good "5 STAR" John Grisham story, I recommend "The Last Juror"?.

Loved it! I was fascinated with every turn of events. Just when you think you know what's going to happen, there's a twist. Great story, great narration, great writing!

It is very unusualy for me not to finish a book. But, this book just seemed too cliche...the guy steals the money, gets the girl, runs away, gets caught and now the lawyers will brilliantly manipulate the system. Of course, I understand the ending is great but I just didn't want to spend the much time. Another thing that bothered me was that there was absolutely no remorse. The guy did commit a crime and steal the money. Although the ones he took it from are unlikeable, that's not a good enough reason to become a thief. And then, he wants to waste the taxpayers' resources by suing the FBI or whoever else he can find....what a sleeze.

Most of the Grisham books I've read involve money, a girl, and freedom. Which will the main character win, and which will he lose? Sometimes there are nice trade-offs. With this book, I didn't see the ending coming.

While this story dragged in portions, it was good in the end. If you are a Grisham fan, I recommend renting/buying this one.

What I didn't like about this Audio presentation was the sudden burst of music during narration. I would be listening to the quite narration and in jumps music. Depending where I was (usually my car, it would momentarily distract me as I wondered where that noise was coming from. I only listened to the first CD so I cannot really comment on the story line.

This story was definitely entertaining and held my interest for the many hours I spend in the car. It just wasn't a "Wow" book like "Honeymoon" was -- you know, you just can't wait to get back to it or you sit in the car after you've arrived to listen to more.

Another masterpiece from Grisham. As the story unfolds I felt like I had figured out the ending before I got there, but I was very surprised. Don't miss listening to this book if you like Grisham.

I simply love nearly everything Grisham writes -- this is another great one. You know that lots is being lost in the abridgement, but I didn't mind. I got plenty of meat to chew on. Kept me interested throughout.

I really enjoyed this book. Kept me interested all the way through. I figured out the ending of the book before I started the last disk. I was disappointed that I was right ! Interesting twist though - I would have preferred to have been shocked though.

This was a most enjoyable production of a pretty good story - until the end. The end was not up to Grisham's standards; it was as though he wasn't exactly sure how to end it and more just ran out of gas. He should have closed it out sooner. But a good story, nonetheless.

This is a very good book. I enjoyed it very much and recommend it very highly. It is a John Grisham, high suspence, total envolvement, pleasure to hear.

Great book. Kept my interest all the way through and had a nice twist at the end!

This one was very good, one of Grisham's best. The only problem was keeping all of the names straight.

Good and exciting with sufficient twists and turns along the way. A good read.

As always, Grisham continues to pull me in with complex plots, interesting characters and the hint of secrets that are sure to be revealed at the very end of the book. This was fun to listen to, although I found the ending a bit predictable. The reader, Michael Beck does a great job with making each voice unique.

John Grisham, has mastered the art of telling lawyer tales. The story and plotting almost seem unfair, but in the end the irony of the conclusion was masterful. The jumping back and forth was a litte disconcerting at times but it did help fill in the blanks. This was an excellent story.

This title is due for release on January 7, 1997
We'll send you an email as soon as it is available!