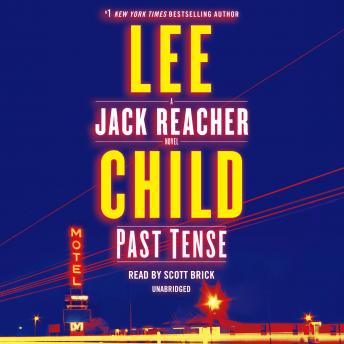 Past Tense: A Jack Reacher Novel

Family secrets come back to haunt Jack Reacher in this electrifying thriller from “a superb craftsman of suspense” (Entertainment Weekly).

Jack Reacher hits the pavement and sticks out his thumb. He plans to follow the sun on an epic trip across America, from Maine to California. He doesn’t get far. On a country road deep in the New England woods, he sees a sign to a place he has never been: the town where his father was born. He thinks, What’s one extra day? He takes the detour.

At the same moment, in the same isolated area, a car breaks down. Two young Canadians had been on their way to New York City to sell a treasure. Now they’re stranded at a lonely motel in the middle of nowhere. The owners seem almost too friendly. It’s a strange place, but it’s all there is.

The next morning, in the city clerk’s office, Reacher asks about the old family home. He’s told no one named Reacher ever lived in town. He’s always known his father left and never returned, but now Reacher wonders, Was he ever there in the first place?

As Reacher explores his father’s life, and as the Canadians face lethal dangers, strands of different stories begin to merge. Then Reacher makes a shocking discovery: The present can be tough, but the past can be tense . . . and deadly.

A little drawn out for Jack Reacher

I found one of the story lines a little tedious and I was ready to ‘off’ them myself as I found the characters annoying. But in true Reacher fashion, he comes along a saves the day!

Good read. Enjoy the twist involved toward the end

Best of the Best! Reacher a true hero!

Hi people. I am an author myself. I was surprised to hear the story had a Y plot that met in the last part of the book. It takes a brave author to mess with a proven formula of success. I got into the separate narratives easily and my real interest was to see how Reacher was going to be involved in the other part. I was not disappointed in Reachers family story or the canadians story either. I was very pleased when Reacher made his grand entrance just in the nick of time. I could not put it down as we say. Book and plot might be too complicated for simpler minds but I give it high marks....

Certainly not my favorite Reacher. Story was disjointed and confusing. One thing basically had nothing to do with the other :(

This book started off slaw and confusing to me. I couldn’t follow it mainly because I was interrupted so often. However when I finally got into it and could identify the storyline, I was set. I wanted to hurry to get to the end. Very entertaining. This is one of my favorite authors and character.

Reacher is back. Best book in the last 3. Good plot and nice interwoven stories. I really like Scott brick as a reader.

Definitely worth the money.

This is the worst book, I have ever heard, the only reason i listened is Scott Brick, I can't belive that Lee Child was involved with this trash

The plot is boring !

This title is due for release on November 5, 2018
We'll send you an email as soon as it is available!