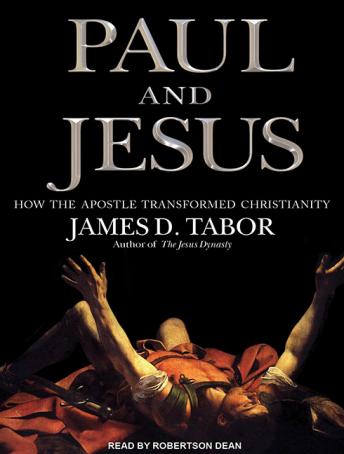 Paul and Jesus: How the Apostle Transformed Christianity

Historians know virtually nothing about the two decades following the crucifixion of Jesus, when his followers regrouped and began to spread his message. During this time the man we know as the apostle Paul joined the movement and began to preach to the gentiles.Using the oldest Christian documents that we have-the letters of Paul-as well as other early Christian sources, historian and scholar James Tabor reconstructs the origins of Christianity. Tabor reveals that the familiar figures of James, Peter, and Paul sometimes disagreed fiercely over everything from the meaning of Jesus' message to the question of whether converts must first become Jews. Tabor shows how Paul separated himself from Peter and James and introduced his own version of Christianity, which would continue to develop independently of the gospel message that Jesus, James, and Peter preached.Paul and Jesus gives us a new and deeper understanding of Paul as it illuminates the fascinating period of history when Christianity was born out of Judaism and became the religion we recognize today.

Excellent. An historical account, by an expert who has studied all of the sources, and offers facts as such are developed in any other historical review without current-day cultural and/or philosophical ( theological ) biases, which will disturb many whose biases depend upon a biased study of history. Biases are common and are part of the human condition, even essential but, at some point in life, their origins should be reviewed as part of gaining the gift that aging offers - wisdom.

This title is due for release on November 26, 2012
We'll send you an email as soon as it is available!