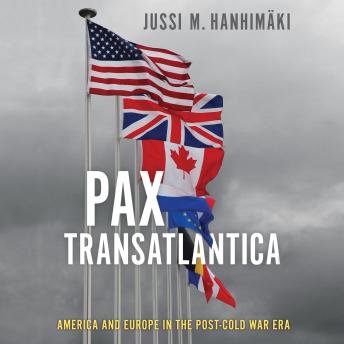 Is the West finished as a political idea? In recent years, observers have begun pointing to signs that this transatlantic community is eroding. When the European Union expanded, the classic European nation state was in decline. Now, nationalism is on the rise. Furthermore, nations within the EU are less willing to cooperate with the US on policies that require sacrifice and risks, such as using military force alongside the US. Today, following the twin shocks of Brexit and Trump's election, the concept of a unified Western transatlantic community seems to be a relic. But, in Pax Transatlantica, the international historian Jussi Hanhimäki explains why the West is far from over.

Hanhimäki argues that-despite Trump's inflammatory, dismissive rhetoric-NATO continues to provide robust security for its member states. NATO has survived by expanding its remit and scope, and it is viewed favorably by member states overall. Moreover, the transatlantic relationship boasts the richest and most closely connected transcontinental economy in the world. Lastly, Hanhimäki traces the parallel evolution of domestic politics on both sides of the Atlantic, focusing on the rise of populism. He contends that populism is not causing a rift between the US and Europe. Rather, the spread of populism evinces that their politics are in fact closely integrated.