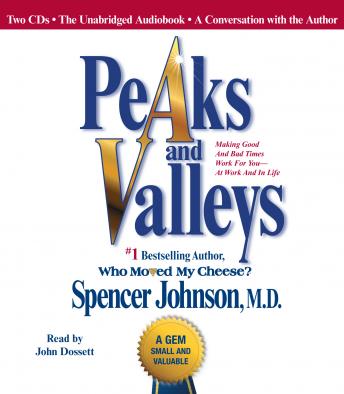 Peaks and Valleys: Making Good and Bad Times Work for You--at Work and in Life

From the #1 New York Times bestselling author of Who Moved My Cheese?, a brilliant new parable that shows readers how to stay calm and successful, even in the most challenging of environments.

A young man lives unhappily in a valley. One day he meets an old man who lives on a mountain peak. At first the young man doesn’t realize that he is talking to one of the most peaceful and successful people in the world. But in the course of further encounters and conversations, the young man comes to understand that he can apply the old man’s remarkable principles and practical tools to his own life to change it for the better. Spencer Johnson knows how to tell a deceptively simple story that teaches deep lessons. The One Minute Manager (co-written with Ken Blanchard) sold 15 million copies and stayed on the New York Times bestseller list for more than twenty years. Since it was published a decade ago, Who Moved My Cheese? has sold more than 25 million copies. In fact there are more than 46 million copies of Spencer Johnson’s books in print, in forty-seven languages—and with today’s economic uncertainty, his new book could not be more relevant. Pithy, wise, and empowering, Peaks and Valleys is clearly destined to becomeanother Spencer Johnson classic.

Peaks and Valleys: Making Good and Bad Times Work for You--at Work and in Life

This title is due for release on March 3, 2009
We'll send you an email as soon as it is available!