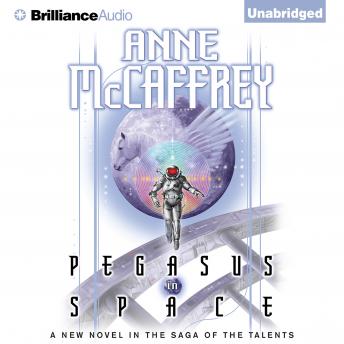 For an overpopulated Earth, whose resources are strained to the breaking point, there is only one place to look for relief: straight up. With the successful completion of the Padrugoi Space Station, humanity has at last achieved its first large-scale permanent presence in space. Additional bases are feverishly being built on the Moon and on Mars, stepping-stones to the greatest adventure in all history: the colonization of alien worlds. Already long-range telescopes have identified a number of habitable planets orbiting the stars and distant galaxies. Now it's just a question of getting there.

But there are those who, for selfish motives of their own, want Padrugoi and the other outposts to fail. People who will stop at nothing to maintain their power or to avenge its loss. Standing in their way are the Talented, men and women gifted with extraordinary mental powers that have made them as feared as they are respected—and utterly indispensable to the colonization effort.

There is Peter Reidinger, a teenage paraplegic who is the strongest telekinetic ever, his mind capable of teleporting objects and people thousands of miles in the blink of an eye. Yet all his power cannot repair his damaged spine or allow him to feel the gentle touch of a loved one...Rhyssa Owne, the powerful telepath and mother hen to Peter, and the rest of her 'children'—and a fierce, unrelenting fighter against the prejudice that would deny the Talented the right to lead happy and productive lives…and Amariyah, an orphan girl who loves two things in the world above all others: gardening and Peter Reidinger. And woe to anyone who harms either one of them—for the young girl's talent may prove to be the most amazing of all.

This title is due for release on March 25, 2005
We'll send you an email as soon as it is available!