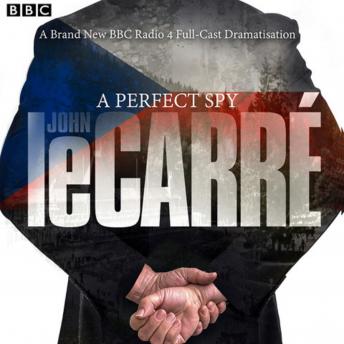 ‘Love is whatever you can still betray. Betrayal can only happen if you love.’

So says Magnus Pym, the spy of the title; and he has betrayed a lot in his life – countries, friends, family and lovers. When Magnus disappears after his father’s funeral, MI6 launches an urgent manhunt to prevent his defection. But Pym is on a search of his own – to unravel the mystery of what made him the perfect spy.

Was it the duplicity of his con artist father, Rick? Or his MI6 mentor and father figure Jack Brotherhood? Or was it Axel, the Czech agent he has known since his teens? All have marked him in crucial ways, and as the net closes around Magnus, he attempts finally to make sense of his life and find the source of his talent for deception...

A Perfect Spy is le Carré’s most autobiographical novel, and has been hailed as his masterpiece. This superlative radio production, starring Julian Rhind-Tutt, Bill Paterson, Michael Maloney and Anton Lesser, is a compelling exploration of identity, treachery and the complexities of the human heart.

This title is due for release on August 17, 2017
We'll send you an email as soon as it is available!