The Perfect Theory: A Century of Geniuses and the Battle over General Relativity 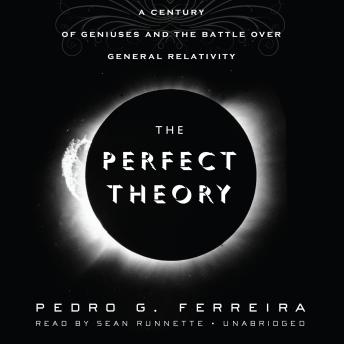 How did one eleganttheory incite a scientific revolution?
Physicists have been exploring, debating, and questioningthe general theory of relativity ever since Albert Einstein first presented itin 1915. Their work has uncovered a number of the universe's more surprisingsecrets, and many believe further wonders remain hidden within the theory'stangle of equations, waiting to be exposed. In this sweeping narrative ofscience and culture, astrophysicist Pedro Ferreira brings general relativity tolife through the story of the brilliant physicists, mathematicians, andastronomers who have taken up its challenge. For these scientists, the theoryhas been both a treasure trove and an enigma, fueling a century of intellectualstruggle and triumph.
Einstein's theory, which explains the relationships amonggravity, space, and time, is possibly the most perfect intellectual achievementof modern physics, yet studying it has always been a controversial endeavor.Relativists were the target of persecution in Hitler's Germany, hounded inStalin's Russia, and disdained in 1950s America. Even today, doctorate studentsare warned that specializing in general relativity will make them unemployable.
Despite these pitfalls, general relativity has flourished,delivering key insights into our understanding of the origin of time and theevolution of all the stars and galaxies in the cosmos. Its adherents haverevealed what lies at the farthest reaches of the universe, shed light on thesmallest scales of existence, and explained how the fabric of reality emerges.Dark matter, dark energy, black holes, and string theory are all progeny ofEinstein's theory.
We are in the midst of a momentous transformation in modernphysics. As scientists look farther and more clearly into space than everbefore, The Perfect Theory reveals the greater relevance ofgeneral relativity, showing us where it started, where it has led, and where itcan still take us.

Perfect Theory: A Century of Geniuses and the Battle over General Relativity

This title is due for release on April 1, 2014
We'll send you an email as soon as it is available!