Perry Mason and the Case of the Howling Dog: A Radio Dramatization 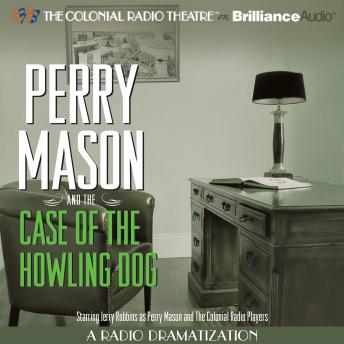 In The Case of the Howling Dog, Arthur Cartwright, an anxious man, goes to Perry Mason to have his neighbor arrested for his vindictive and noisy dog. He is under the belief that his howling is an indication that somebody has been murdered in the neighborhood. He demands that his will be written bequeathing the estate to the lady living at the neighbor's house. However, the will is mysteriously altered by an unknown person and Cartwright goes missing, along with the lady.

Perry Mason and the Case of the Howling Dog: A Radio Dramatization

This title is due for release on August 9, 2011
We'll send you an email as soon as it is available!