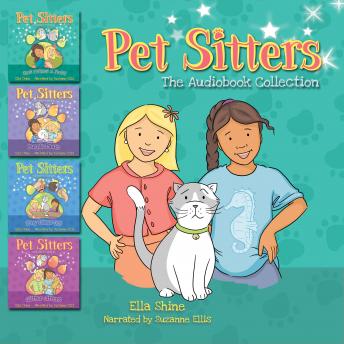 Need a pet sitter? Cassie and Lina are the girls for the task… as long as Gus the talking cat can keep out of trouble!This audiobook collection of four hilarious Pet Sitters stories by Ella Shine includes:

Best friends Cassie and Lina would love to take a pet to the Pet Parade but it's not possible... until they're asked to pet sit Gus the cat next door. The girls might be 'ready for anything' but Gus isn't quite the cat they were expecting.

Princess Gina’s owner is very fussy but Cassie and Lina think they’ll be able to care for her guinea pig just fine… until Gus runs off with the pet sitting instructions and Princess Gina can’t even be seen!

‘No chaos! And no emergencies!’ says Mum when Cassie and Lina pet sit again. But Tony the miniature pony isn't your average pet… And when Tony disappears from the paddock with Lina's little brother, someone's going to have to fly to the rescue.

Cassie and Lina think Bella the bearded dragon is SO beautiful. Gus is not so sure, and he’s determined to prove it… But no one’s expecting Bella to have some seriously sparkly allergies. Now everyone’s got the glitter jitters, especially Gus!

Looking for an engaging, fun junior series with great values, gorgeous characters and hilarious action, with a sprinkling of the unexpected? You've found it.Also available in print and ebook formats.