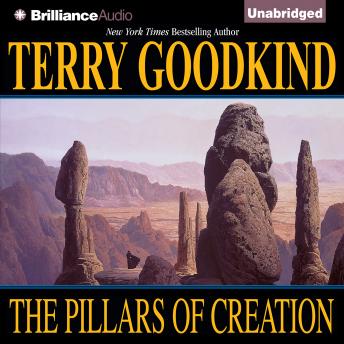 The Pillars of Creation

#7 of Sword of Truth Series

New York Times bestselling author Terry Goodkind has created his most lavish adventure yet. Tormented her entire life by inhuman voices, a young woman named Lauren seeks to end her intolerable agony. She at last discovers a way to silence the voices. For everyone else, the torment is about to begin.

With winter descending and the paralyzing dread of an army of annihilation occupying their homeland, Richard Rahl and his wife Kahlan must venture deep into a strange and desolate land. Their quest turns to terror when they find themselves the helpless prey of a tireless hunter.

Meanwhile, Lauren finds herself drawn into the center of a struggle for conquest and revenge. Worse yet, she finds her will seized by forces more abhorrent than anything she ever envisioned. Only then does she come to realize that the voices were real.

Staggered by loss and increasingly isolated, Richard and Kahlan must stop the relentless, unearthly threat which has come out of the darkest night of the human soul. To do so, Richard will be called upon to face the demons stalking among the Pillars of Creation.

Discover breathtaking adventure and true nobility of spirit. Find out why millions of readers the world over have elevated Terry Goodkind to the ranks of legend.

I love this series but was really disappointed with this particular novel. The author devoted nearly the entire book to new characters and we don't even see Richard, Kalan to the last couple chapters. I understand the need to develop backstory, but the particular novel felt poorly paced and disjointed from the series.

The book was great. Just like all the others in the series it starts slow and builds throughout. I don't very much like this narrator, but he's far from the worst of all the different people they've had narrate this series.

I enjoyed the book and found the narrator easy to listen too. 90% of the book covers new characters but I still found it enjoyable.

People complain about Jim Bond left and right, but TRUST ME, no one can save this story as it feels more like a side story than a Sword of Truth story proper, but this is where the cracks start to show in the story. I did not especially care for the story in this, but there are some shining moments that are not really worth the time to be committing to a book that takes nearly a whole day's time to listen to. If you came for Richard and co.,this is not the story for you.

I love this series but this book was not on par with the others in the series. It's very slow moving and the main characters are in it only for a short time in the last few chapters.

I loved how we got to see the battle from another perspective. I thought I wouldn’t enjoy following the new characters, but quickly grew to love them.

it was enjoyable, but definitely not a favorite of the series. The narrator..though im sure he "tried"...was painful at times to listen to.

great book. the new characters renewed the interest of the series for me. one of my faves by goodkind

I love this series, but I didn't like this particular entry. Way too much time spent on a couple characters, but the worst part was the repeating of explanations over and over again, as well as over-explaining things in the first place.

Easily the worst of the series. The blatant flip flopping of good and evil between Richards siblings is extremely repetitive and onerous. Especially constantly reminding you how easily Jensen believes anything anyone tells her. And ending with Richard popping up saying oh hey I’m not evil they are, whoops! Come on Terry. I hope to see better from you in the nicci chronicles. Don’t try and pull another legend of the seeker on us.