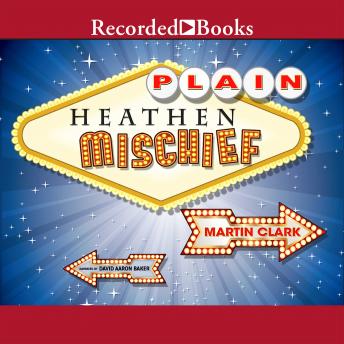 'Of The Many Aspects of Mobile Home Living, Martin Clark's first novel, the New York Times Book Review wrote, 'Like Nick Hornby in High Fidelity and Thomas McGuane in Nothing But Blue Skies, Clark has produced an oddly stirring portrait of a man in existential disarray.' Which-noted Malcolm Jones in Newsweek-'made me laugh so hard I fell off the sofa.' Plain Heathen Mischief ups the existential ante, as Joel King, a defrocked Baptist minister, finds life even more bedeviling once he's served six months for a career-ending crime he might not even have committed. Now his incommunicado wife wants a divorce, the teenage vixen of his disgrace is suing him for a cool $5 million, a fresh start in Montana offers no hope for ex-cons of any religious persuasion, and the refuge provided by his sister turns as nasty as his parole officer. Talk about a crisis of faith. On the upside, a solicitous member of Joel's former congregation invites him into a scam that could yield some desperately needed cash, and soon the down-on-his-luck preacher is involved with a flock of charming con men, crooked lawyers, and conniving youth. In a feat of bravura storytelling, Martin Clark ranges from the cross to the double cross, from Virginia to Las Vegas, from jail cells to trout streams, as he follows his Job-like hero through dubious choices and high-dollar insurance hustles to a redemption that no reader could possibly predict. Wildly imaginative, at times comic, at times profoundly sobering, and even more audacious than his wonderfully idiosyncratic debut, Plain Heathen Mischief is a spiritual revelation of the first order.'