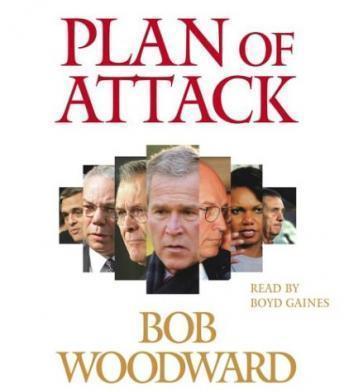 Plan of Attack is the definitive account of how and why President George W. Bush, his war council, and allies launched a preemptive attack to topple Saddam Hussein and occupy Iraq. Bob Woodward's latest landmark account of Washington decision making provides an original, authoritative narrative of behind-the-scenes maneuvering, examining the causes and consequences of the most controversial war since Vietnam.
Based on interviews with 75 key participants and more than three-and-a half hours of exclusive interviews with President Bush, Plan of Attack is part presidential history charting the decisions made during 16 critical months; part military history; and part a harrowing spy story as the CIA dispatches a covert paramilitary team into northern Iraq six months before the start of the war.
What emerges are astonishingly intimate portraits: President Bush in war cabinet meetings and in private conversation; Dick Cheney, the focused and driven vice president; Colin Powell, the conflicted and cautious secretary of state; Donald Rumsfeld, the controlling war technocrat; George Tenet, the activist CIA director; Tommy Franks, the profane and demanding general; Condoleezza Rice, the ever-present referee and national security adviser; Karl Rove, the hands-on political strategist; other key members of the White House staff and congressional leadership; and foreign leaders ranging from British Prime Minister Blair to Russian President Putin.
Plan of Attack provides new details on the intelligence assessments of Iraq's alleged weapons of mass destruction and the planning for the war's aftermath.

With what's been disclosed about the Administration's mechaniations to sell the Iraq war, it's pretty clear that Woodward had the wool pulled over his eyes when interviewing Rumsfeld, Bush, et al for this book.

[abridged] A must-read if you want to learn how President Bush got us into an unnecessary war. Woodward does a great job of providing insights into the thinking of Bush's inner circle. Woodward clearly shows how neo-conservatives developed momentum for removing Saddam Hussein from power without much concern for the consequences of war or the need for valid justification to attack. This war seemed to Bush to be almost too easy! So who not attack? After all, he is the war president.

Bob Woodward is a master at telling the facts in a way that makes you feel like you're right there in the room with all the players. Whether you like the Bush Bunch or not, you feel like you know the guys by the end of this audio recording.

A good read, though I can't help feeling that this book was attempting to deflect some of Rumsfelds / Bush's part in the entire affair. While there was good information in the book, I can't shake the impression that it was intended to be more of a "feel good" book, attempting to give the reader an impression that these two really didn't want to go to war, and don't deserve to have blood on their hands. No wonder this book is on Bush's reading list recommendations. Propaganda?

Bob is fair and non-partisan in this book. I enjoyed it.

Inside story of the days leading to the war(Iraq). A must read.

This title is due for release on April 19, 2004
We'll send you an email as soon as it is available!