Play by Play: Calling The Wildest Games In Sports-From SEC Football to College Basketball, The Masters and More 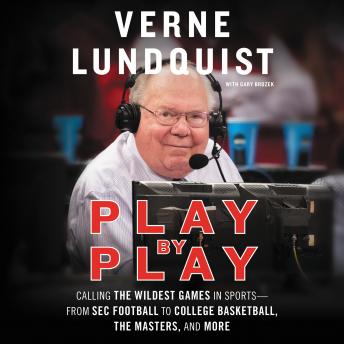 One of America's most beloved sportscasters turns the spotlight on his own life, chronicling his incredible life covering Southeastern Conference football and some of the most iconic moments in sports history over the last five decades.

Verne Lundquist's remarkable broadcasting career has placed him at the center of major sporting events in America for more than fifty years, from Jack Nicklaus's final victory at the 1986 Masters to Tonya Harding's attack on Nancy Kerrigan at the 1994 Olympics to the Auburn-Alabama shocker of 2013. In his first memoir, he replays highlights from his career, taking sports fans behind the scenes of some of the most dramatic moments in modern sports history.

Lundquist goes back to the early days of his broadcasting career, recalling his time as a producer and radio show host in Dallas when President John F. Kennedy was shot. He reminisces about Tom Landry and the great Dallas Cowboy teams of the 1970s, recalls the most unbelievable moments in Masters Tournament history, and relives the excitement of Christian Laettner's buzzer beater in the NCAA tournament and a host of other memorable thrills.

One of the defining voices of Saturday afternoon football for the SEC, Lundquist offers an in-depth look at the fans, the schools, and the game, recounting never-before-told stories about some of college football's biggest personalities. He also speaks honestly about his friendships with Terry Bradshaw, John Madden, and other greats, and his difficult relationship with legendary colleague Pat Summerall. Bringing these memories vibrantly to life with his beloved catchphrases and warm humor, Lundquist gives listeners a front row seat to history as he witnessed it unfold.

Play by Play: Calling The Wildest Games In Sports-From SEC Football to College Basketball, The Masters and More