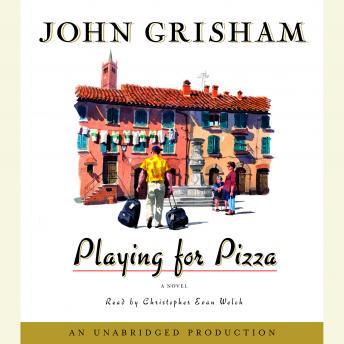 Playing for Pizza: A Novel

Rick Dockery was the third-string quarterback for the Cleveland Browns. In the AFC Championship game against Denver, to the surprise and dismay of virtually everyone, Rick actually got into the game. With a 17-point lead and just minutes to go, Rick provided what was arguably the worst single performance in the history of the NFL. Overnight, he became a national laughingstock and, of course, was immediately cut by the Browns and shunned by all other teams.

But all Rick knows is football, and he insists that his agent, Arnie, find a team that needs him. Against enormous odds Arnie finally locates just such a team and informs Rick that, miraculously, he can in fact now be a starting quarterback–for the mighty Panthers of Parma, Italy.

Yes, Italians do play American football, to one degree or another, and the Parma Panthers desperately want a former NFL player–any former NFL player–at their helm. So Rick reluctantly agrees to play for the Panthers–at least until a better offer comes along–and heads off to Italy. He knows nothing about Parma, has never been to Europe, and doesn’t speak or understand a word of Italian. To say that Italy holds a few surprises for Rick Dockery would be something of an understatement.

I loved this book! I love football so this was definitely a great read. Even if you don't like football you will like this book. The reader makes all the accents and it's so funny at times! Recommend it for sure!

A great lighthearted story that was very entertaining. A great writing job and a great reader. Strongly recommend this book

What a great story. What great characters. I highly recommend. Very fun.

Loved this story. The character found that being a great football hero was not all that was needed to be have a great life. Good reading for the soul.

I find Grisham overrated and I have no interest in Italy and dont like sports let alone football. This book quickly grabbed me and would not let go. I became interested in everything I was not before.

Very boring book. Only made it through 3 discs and decided I couldn't take it anymore. Not up to Grisham standards.

Very entertaining and a very informative perspective on american football in Italy. well done. I bet doing the tax-deductible research was very hard..?

I usually like John Grisham, but this book was awful. I turned it off halfway through. The plot did not go anywhere and there was way too much mindless description of things. Don't waste your time.

The book started out good but as it went along it dragged in places. It's hard to explain. The content and story was good but then it just ended blaw. I am not saying it was a bad story but I felt I wasted my time.

If you are a football fan, you will love this book. Although I am just a casual watcher of football, I really enjoyed this story. Very good job of illustrating the action and plays on the football field to the degree that you could imagine you are actually sitting in the stands watching the game. I lived in Europe for a number of years, and the way John Grisham describes the cities and countryside took me right back over there. One thing I would recommend; Eat before you listen to this book. The way Mr. Grisham writes about the wonderful Italian meals is SO accurate that you can almost smell the restaurant they are dining in. (It will make an empty stomach grumble.)

With a reputation for suspense and drama, I thought Grisham's Playing For Pizza would be a fun listen in my car going to and fro from work. It was such a disappointment, I will only consider a Grisham book if there are no other alternatives and my radio is broken. I kept waiting for a plot to develop as the main character encountered "professional difficulties" and went to Italy for work. The plot never materialized; instead, I was left listening to a blog of a money-grubbing compulsive writer who went to Italy for a summer vacation who wanted to write off the expenses. If the original manuscript was submitted to a publisher without the Grisham name, it would justifiably be decomposing in the local dump right now.

I could not get into the book. If there is a story line I did not find it. I did not finish the book Boring, Boring, Boring. I was very disappointed this book is not up to John Grisham's standards. If I could I would request my money back.

Great Book has me wanting to move to parma italy. it is more than a sports story.

Great book. Good mix of football and intrigue. Very realistic and great narrative about Italian culture. I've read all the Grisham books and this one is in my top 3.

This title is due for release on September 24, 2007
We'll send you an email as soon as it is available!