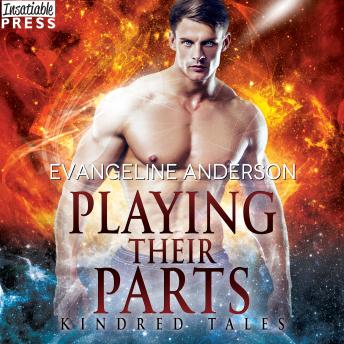 Two detectives, hot on the heels of a killer...Undercover as adult actors on the wild planet of Bachanalius

Will Steel and Cassie find passion while...

Cassandra Steel and Commander Stone are a unique pair. Together, they comprise the first human/Kindred detective team on the Tampa PD. Their caseload is pretty normal until a heinous new crime is committed--a woman is murdered and it appears that the culprit is a Kindred.Knowing that a Kindred warrior would never hurt a female, Cassie and Stone start following the trail of the murderer. But it leads them all the way to Bachanalius, a planet devoted entirely to the production of all kinds of alien adult entertainment. Undercover as "actors," can Cassie and Stone keep their partnership intact? Will making naughty vids together bring them closer together...or drive them apart entirely? And what about the murderer they are stalking? Will they catch him before he kills again?You'll have to read Playing Their Parts to find out.

This title is due for release on August 1, 2021
We'll send you an email as soon as it is available!