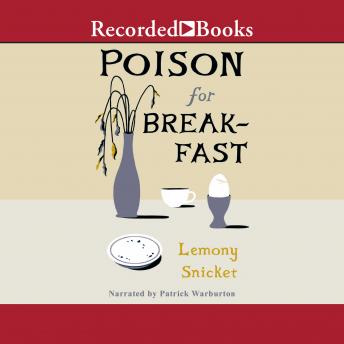 In the years since this publishing house was founded, we have worked with an array of wondrous authors who have brought illuminating clarity to our bewildering world. Now, instead, we bring you Lemony Snicket.

Over the course of his long and suspicious career, Mr. Snicket has investigated many things, including villainy, treachery, conspiracy, ennui, and various suspicious fires. In this book, he is investigating his own death.

Poison for Breakfast is a different sort of book than others we have published, and from others you may have read. It is different from other books Mr. Snicket has written. It could be said to be a book of philosophy, something almost no one
likes, but it is also a mystery, and many people claim to like those. Certainly Mr. Snicket didn’t relish the dreadful task of solving it, but he had no choice. It was put in front of him, right there, on his plate.