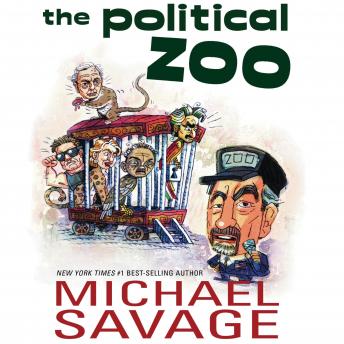 Ladies and gentlemen, welcome to the real national zoo! As Aristotle said, "Man is a political animal." Talk radio sensation and New York Times best-selling author Michael Savage is afraid that the ancient philosopher was all too right, and in ways he never could have imagined. In Savage's funniest, most biting book yet, the nation's fiercest independent thinker invites you to take a riotous tour through The Political Zoo--an outrageous look at today's most prominent politicos and pundits as the reptiles, rats, and birds of prey they most resemble. Animal by animal and cage by cage, Savage brandishes his irreverent wit to keep these beasts in check. Serving as resident biologist and zookeeper, Dr. Savage asks that you watch your step when approaching the widemouth copperhead Ted Turner (also known as Mouthus desouthus), do not feed the ego of stuffed turkey Alec Baldwin (Notalentus anti-americanus), and please keep your children with you at all times around wolf boy Bill Clinton (Fondlem undgropeum). "The world of politics is filled with uncivilized, snarling, rapacious beasts that, like untrained mutts, raise their legs and urinate on everything we hold dear," says Savage. And this sensational book is your guide for navigating the jungle of today's animal-political kingdom.

This title is due for release on April 14, 2006
We'll send you an email as soon as it is available!