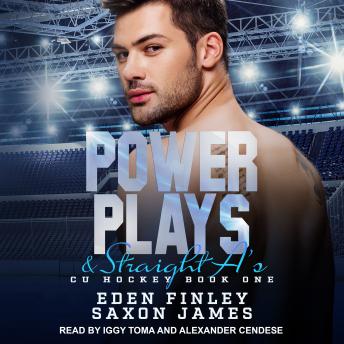 'Look out for Zach and don't hit on him.' My brother's request sounds easy enough. Keep an eye out for his best friend on campus and keep my hands to myself. Easy. Even if Zach is a quintessential nerd, who I've always thought was cute, I don't have the time to think with my ... stick. There's only one stick I should be focused on this year, and that's my hockey stick. My goal once I graduate is to get an NHL contract. The last thing I need is a distraction. On or off the ice. Only, keeping to the rules is harder than I thought it would be.

People confuse me. And no one more than Foster Grant. I've barely spoken two words to him in the whole time I've known him, but the second I step foot on campus, he's impossible to shake. I can never anticipate his next move. And whenever we're together, my next move is a total mystery as well. I want to give in to him, but that might mean coming clean about something I've never been bothered about before. I'm still carrying my V-card. And I think it's time to turn it in.

I liked this, the couple is adorable.

I loved this book.