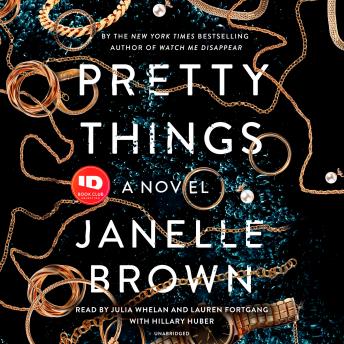 NEW YORK TIMES BESTSELLER • Who’s really following you on social media? The scam of a lifetime brings together two wildly different women in this page-turning thriller about greed, legacy, and betrayal from the New York Times bestselling author of Watch Me Disappear.

Nina once bought into the idea that her fancy liberal arts degree would lead to a fulfilling career. When that dream crashed, she turned to stealing from rich kids in L.A. alongside her wily Irish boyfriend, Lachlan. Nina learned from the best: Her mother was the original con artist, hustling to give her daughter a decent childhood despite their wayward life. But when her mom gets sick, Nina puts everything on the line to help her, even if it means running her most audacious, dangerous scam yet.

Vanessa is a privileged young heiress who wanted to make her mark in the world. Instead she becomes an Instagram influencer—traveling the globe, receiving free clothes and products, and posing for pictures in exotic locales. But behind the covetable façade is a life marked by tragedy. After a broken engagement, Vanessa retreats to her family’s sprawling mountain estate, Stonehaven: a mansion of dark secrets not just from Vanessa’s past, but from that of a lost and troubled girl named Nina.

Nina’s, Vanessa’s, and Lachlan’s paths collide here, on the cold shores of Lake Tahoe, where their intertwined lives give way to a winter of aspiration and desire, duplicity and revenge.

This dazzling, twisty, mesmerizing novel showcases acclaimed author Janelle Brown at her best, as two brilliant, damaged women try to survive the greatest game of deceit and destruction they will ever play.

Best book I’ve listened to in years! I loved it! I laughed out loud quite a bit! The storyline was great i didn’t want to stop listening! I enjoyed the narrators! I would recommend this book! :)

Slow build up. Had me interested and hoping for more grit. I was waiting for a punch of interesting. Once you get to the second half things start to fall into place and the sorry gets more interesting

narrator was great, story was good and compelling

I love the book, nice twist…it grabbed me from the beginning!

Loved the book! Didn’t want it to end.

I enjoyed the narration as the narrator was able to convincingly perform as each individual character making this story easy to see in my mind's eye. Great plot, with several twists and surprising turns. I couldn't wait to get back to this book every chance I would get.

An easy read/listen. Simple story, little twist at the end.

Overall-the storyline is a flop. Still some positives....the narration is beautiful and there were many good parts and lots of enjoyable writing.

slooowww. definitely not for me :)

Good book to listen to.