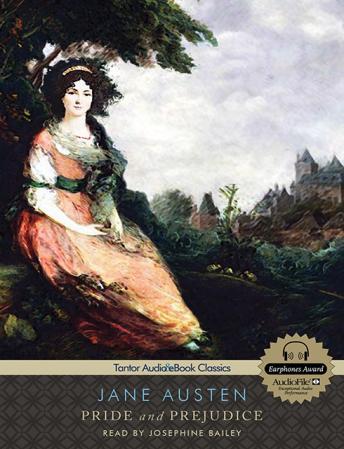 Pride and Prejudice captures the affections of class-conscious eighteenth-century English families with matrimonial aims and rivalries. This story of the Bennet family and the novel's two protagonists, Elizabeth Bennet and Mr. Darcy, is told with a wit that author Jane Austen feared might prove 'rather too light and bright, and sparkling.'

The romantic clash between the opinionated Elizabeth and her proud beau, Mr. Darcy, is a splendid performance of civilized sparring. Austen's artistry is also apparent in the delineation of the minor characters: the ill-matched Mr. and Mrs. Bennet, Charles Bingley and his sisters, and particularly the fatuous Mr. Collins, whose proposal to Elizabeth is one of the finest comic passages in English literature.

Austen's radiant wit sparkles as her characters dance a delicate quadrille of flirtation and intrigue, making this book the most superb comedy of manners of Regency England.

I love the story and the definition of love it depicts. It is a timeless pieces that allows you to see into that time period. I was often lost between some of the voices the narrator tried to use though.

This title is due for release on March 14, 2008
We'll send you an email as soon as it is available!